We have taught Television Production for over a decade and in this time we have developed close links with the factual and entertainment TV industries. We are proud to say our graduates are now working on the some of the top programmes and films in the UK and US.

This is a highly practical course which covers a broad area of television production and is suitable for those who have no prior experience of studying television at university. You will be hands-on in our multi-camera TV studio and on location using a variety of camera, sound and lighting equipment. You will also be taught the post production process and will be encouraged to develop, produce and screen your own programming as part of your learning at Bedfordshire. At the end of your time with us, you will be a multi-skilled, industry-ready practitioner.

Employability is a core feature of this course. It is our job to help you break into TV and we will help you to develop industry links and find paid work or internships during your time with us.

The key to beginning a career in television is finding work experience. But many of these opportunities are not advertised to the public so how do you get started? We are here to help! As part of the MA Television Production course, your lecturers and the University’s Careers team will use their own contacts to link you up with industry placements and paid work in TV and film. We also run networking events here on campus and have set up similar events in Soho and at Bafta to allow our students to meet industry workers and build up their contacts book, all of which is key to getting started in TV.

With our help, many of our students manage to secure paid work in TV and film before they graduate. In the past few years, we have helped students find placements and paid work on the following productions:

Why choose this course?

You will have access to thousands of pounds worth of high-end production kit including cameras, lights, sound recorders, rigs, edit suites, O.B. kit and, of course, our multi-camera TV studio. Aside from assignment production work, you will also get the opportunity to produce

and broadcast your own programming online and on social-media via our in-house TV station BedsTV.

Set up in 2015, the station is a platform for original programming devised and produced by University of Bedfordshire students. Traditionally, the students from our Television Production courses act as BedsTV managers and are involved in the commissioning and producing of programmes for the station. Students on the MA Television Production course have the option of a 3-month internship on BedsTV after their studies where they are expected to take on a leadership role in managing and promoting the station.

Example of BedsTV’s programming include:

BedsTV has also worked on a variety of projects with internal and external clients such as the University’s Sustainability Forum, the NHS and The Culture Trust in Luton.

Visit the School of Culture and Communications

Unit Information - What will I learn?

MED 032-6 Television Development | 30 credits | Core Unit
How do you take an idea and turn it into a sellable TV programme? This unit lifts the lid on the TV development process and gives you the skills needed to develop and pitch your own programme ideas.

MED 033-6 Producing for Television | 30 credits | Core Unit
What are the responsibilities and requirements of the TV Producer in the rapidly changing landscape of television? You will learn about the Producer’s relationship to production as you take on the role for the University’s online station, BedsTV.

MED 035-6 Television Production Technologies | 30 credits | Optional Unit
For student who already have a background in the technical aspects of TV production, This unit can be taken as an alternative to Television Technical Skills. It focuses on in depth training in our equipment and develops your practice and technique to a higher level.

MED 036-6 Practice Based Research for Television Production | 30 credits | Core Unit
What can you learn from the way that you – and industry workers – practise programme making? In this unit you will learn to draw meaning and theory from your television practice.

MED 037-6 Television Project | 60 credits | Core Unit
This unit marks the culmination of your studies. With guidance from your supervisor, you will be expected to produce a substantial piece of television programming or research, which shows off your skillset and understanding of the television industry.

How will I be assessed?

Your production work – in the TV studio and out on location – form the basis of many assessments. As with the real TV industry, you will work in groups as you produce factual, entertainment and drama programming and we will assess both the processes you use to produce the work as well as the quality of the final production.

For other units, essays, reflective reports and presentations will form part of the assessment methods. As the course progresses we move from well-defined conventional production briefs to more open-ended challenging briefs which allow you more scope to develop and produce innovative and ambitious programming.

Applicants should have a good undergraduate degree at Honours level, or equivalent.

Find out more about specific entry requirements for your country

To apply for a postgraduate degree (MA/MSc/MBA/LLM) at the University of Bedfordshire you should have a good honours degree (or equivalent qualification) in an appropriate subject from a recognised university or HE institution.

We will also consider candidates with other relevant qualifications or appropriate work experience.

You also need to have the required English language qualification

How will this course improve my career prospects?

We have a reputation for producing well-rounded, industry-ready TV workers and as a result our alumni have gone on to work for award winning (and Emmy nominated!) productions including:

Graduates of the course have also gone on to work around the globe on major TV dramas and films such as:

Other students have gone on to work for some of the biggest broadcasters in the world including BBC, Sky, BT Sport, CBS and facilities houses such as Envy and Evolutions in Soho.

The full-time standard fee for a taught Master's degree for the Academic Year 2019/20 is £7,340 per year. You can apply for a loan from the Government to help pay for your tuition fees and living costs. Visit www.gov.uk/postgraduate-loan

The University reserves the right to increase tuition fees by no more than inflation.

Alternatively if you have any questions around fees and funding, please email admission@beds.ac.uk

The University reserves the right to increase tuition fees by no more than inflation.

if you have any questions around fees and funding, please email admission@beds.ac.uk

The University of Bedfordshire is proud of its alumni and is delighted to offer a tuition fee discount for those who choose to continue or return to the University for on campus Postgraduate level studies.

Find out more about additional costs while studying at Bedfordshire. Click here. 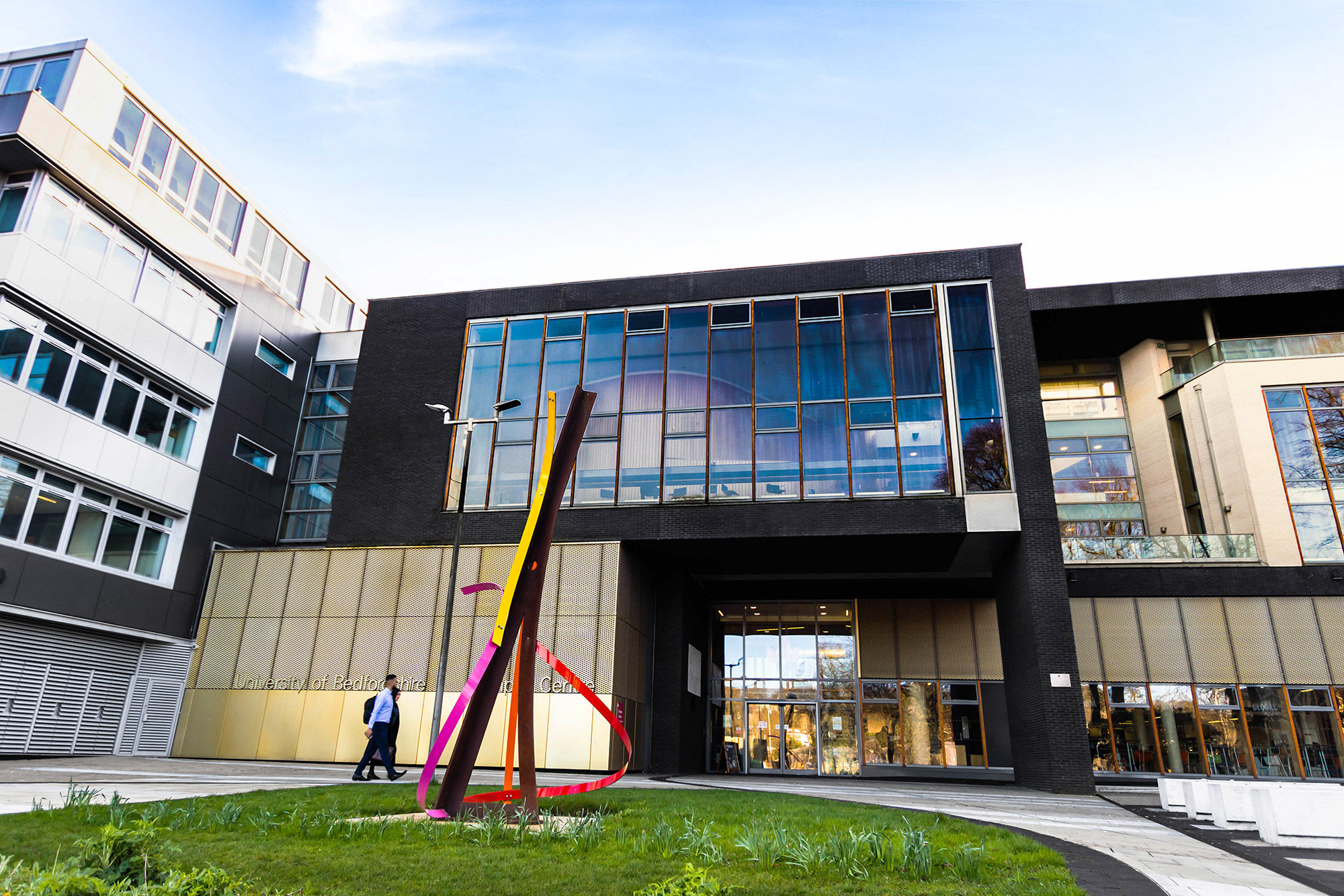 The Campus Centre brings together all our student services under one roof including the Students’ Union and spaces to eat, drink, relax and learn. 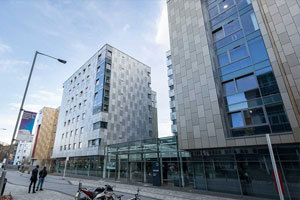 The University guarantees accommodation to all new students. Fitzroy Court and Wenlock Court, the two main halls of residence, are located on campus so getting to lectures, shopping in town and participating in events and activities is easy. 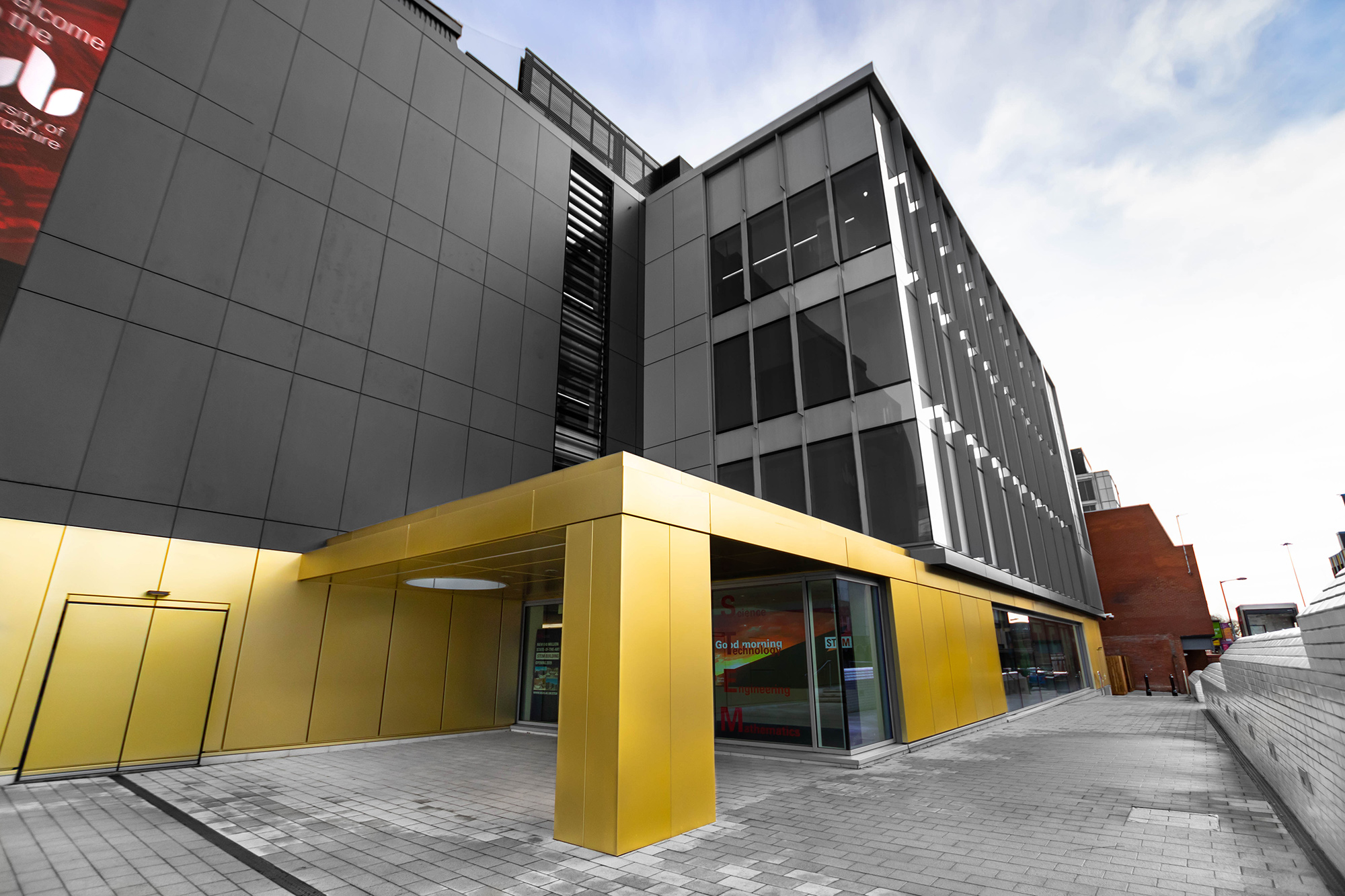 The STEM building is home to courses in the subject areas of science, technology, engineering and mathematics. 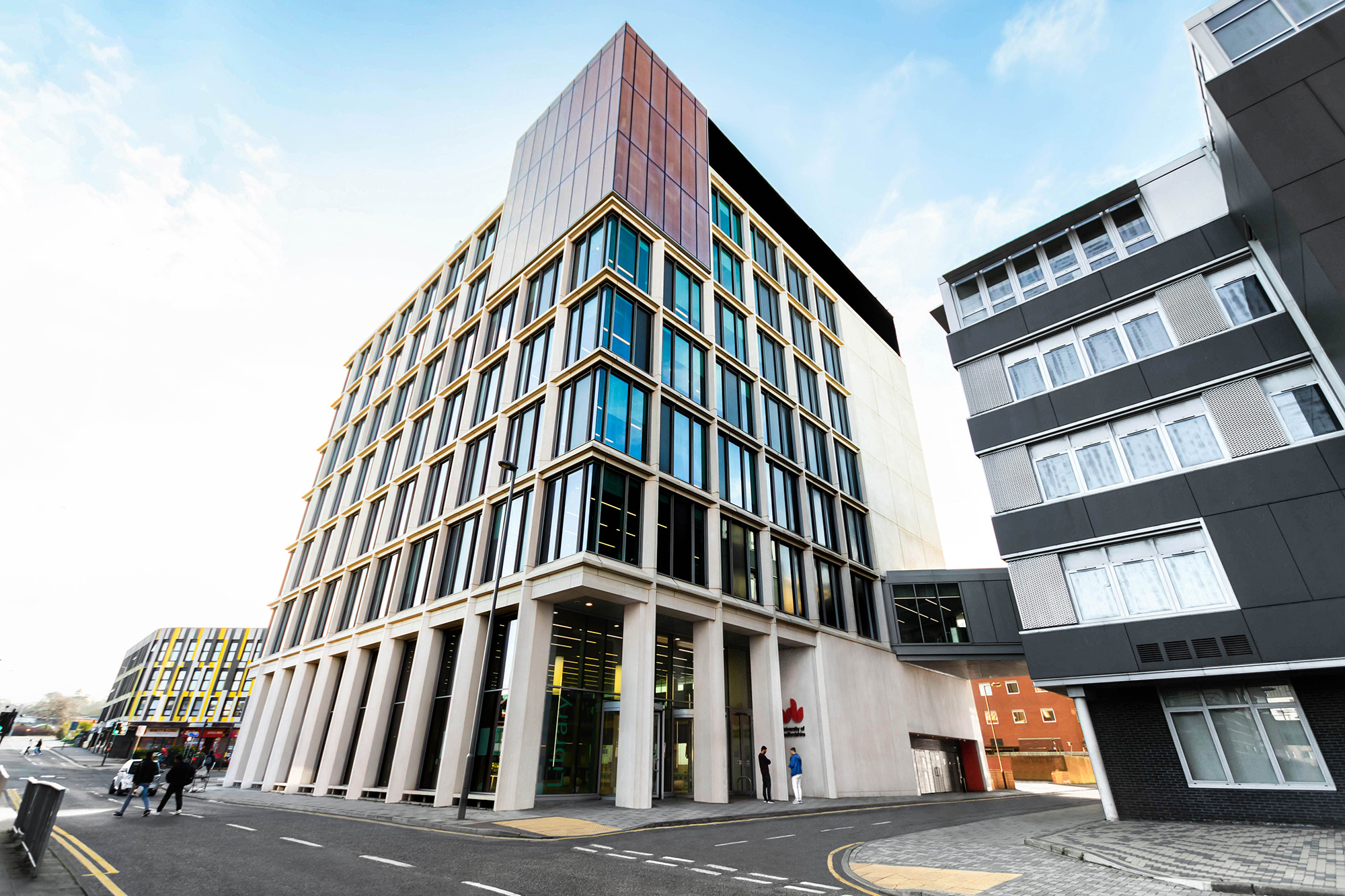 The library is a modern 9-storey building dedicated to study and learning. As well as traditional library provisions it offers individual and group study spaces, a cafeteria on the ground floor and a ‘Study Hub’ offering guidance and workshops on academic writing and research skills to ensure all Bedfordshire students get the help they need to succeed in their studies. 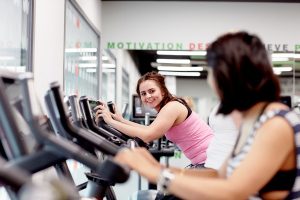 The Aspire Gym has state of the art cardiovascular equipment with smart phone compatibility. There is also an extensive range of fixed resistance machines and a small free weights area. 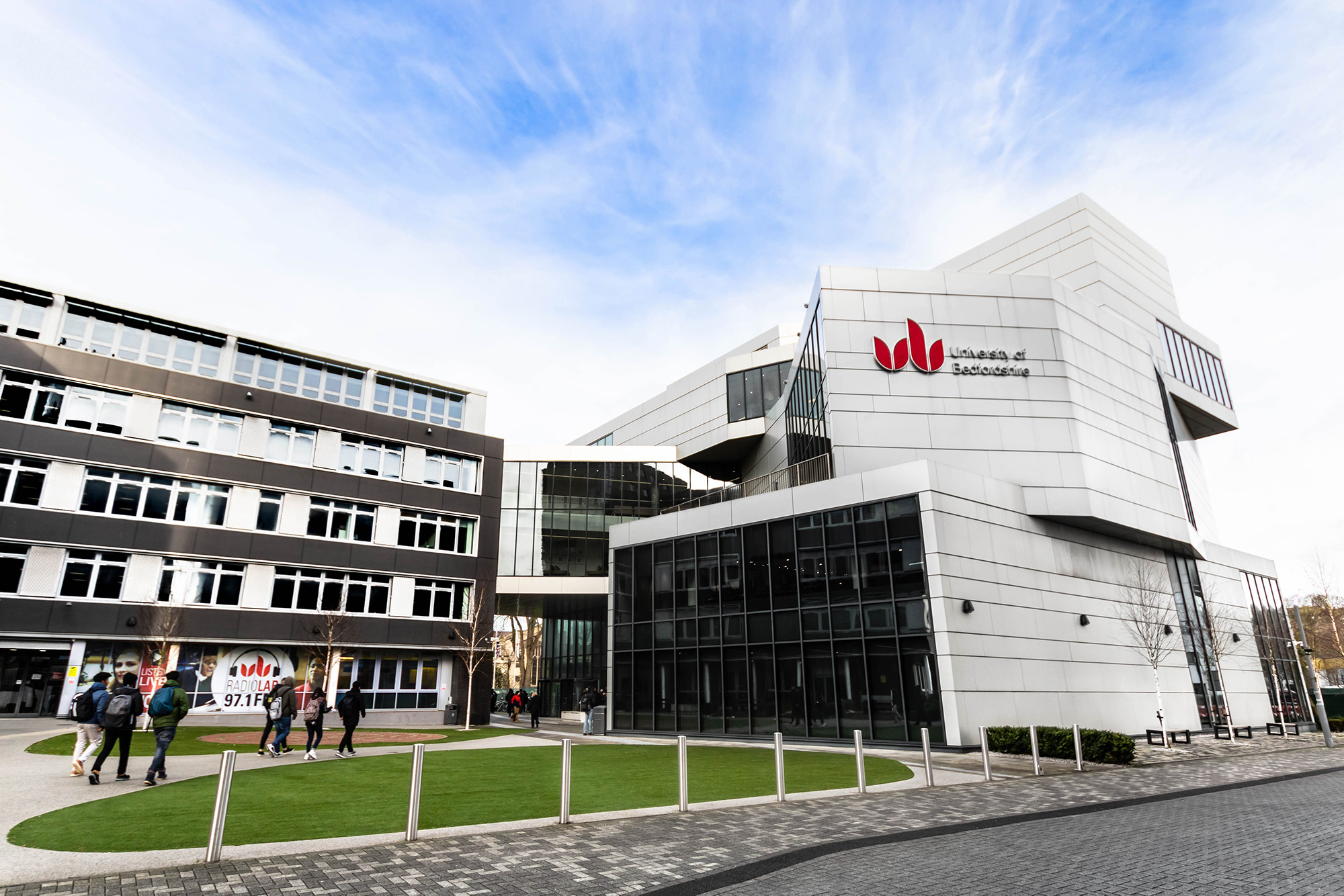 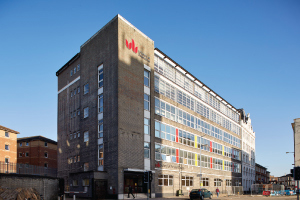 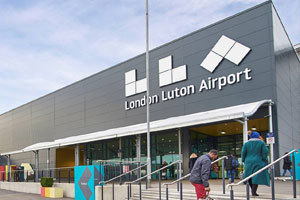 The Luton campus is right in the centre of town next to a large shopping mall and within easy walking distance of train and bus stations. Luton is the largest town in Bedfordshire, approximately 50km north of London which is a 30-minute train journey away. Luton has excellent transport links to the rest of the UK and Europe.

UK students applying for most postgraduate degrees at the University of Bedfordshire should apply direct using our admissions form.

International students applying for a full-time postgraduate degree at the University of Bedfordshire should apply direct using our admissions form or via our representatives in your home country. You can also apply online

Find out more about how to apply as an International student