Reader in Film Practice and Theory 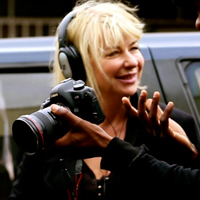 I am a BBC trained, award winning documentary filmmaker with substantial experience in broadcast television in the UK and internationally.

Since winning the Best First Film Prize at the BBC as a trainee, I have gone on to make a number of award winning films across the channels, including the flagship Channel 4's strand Cutting Edge, Discovery and the National Geographic as well as the iconic Married to the Eiffel Tower.

The reviewers have called my films 'seminal', 'groundbreaking' and 'visually stunning'. I have collaborated with important artists all over the world and have recently been working with the British Council as a consultant and trainer.

I have also directed theatre and have recently completed a British Council funded hybrid documentary film shot in Zimbabwe in 2011/2012 and a documentary about Lech Walesa funded with a grant from the European Solidarity Foundation.

In the Barbican exhibition in London in 2009 I was named one of 30 most successful artists of Polish origin living in the UK.

With my move from a practitioner to a practitioner and theorist, I have presented widely in the last few years at international conferences around the world. I have published my first monograph in late September 2013 and am publishing papers in peer-reviewed journals.

An edited collection of essays entitled Embodied Encounters: New Approaches to Film and Psychoanalysis will be published in 2014 with Routledge.

I am also a co-leader of a new research initiative Psychoanalysis in Our Time funded by the Nordic Council of Ministers.

I am working on a new monograph on documentary and post-colonial discourse.