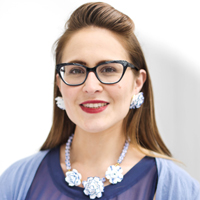 I took up my position as Lecturer in Media Arts in September 2015 after teaching animation, film and media studies in different universities including Queen's University Belfast, University of Portsmouth and University of Southampton.

My main specialisms are in memory studies and European cinema. I have research interests in the representation of terrorism in film and television, nostalgia and retro cultures and fashion/costumes in cinema. I developed a keen interest in the cultural memory of left-wing terrorism in German and Italian cinema during my postgraduate studies.

The course units that I design and teach are primarily concerned with film history and theory and I enjoy adopting a creative student-led approach to teaching at undergraduate and postgraduate level.

@uniofbeds
Just under a week to go until our next Online Open Day next Saturday the 24th of April! 🏢 Register here:… https://t.co/xUNfsudNP2

@uniofbeds
RT @uniofbedsnews: Our thoughts and prayers are with HM The Queen and the Royal Family today as we celebrate the life of HRH The Duke of Ed…

@uniofbeds
RT @LLieutenantBeds: Our thoughts and prayers remain with HM The Queen and the Royal Family in the pain of their loss, and we hope that the…

@uniofbeds
RT @LLieutenantBeds: Today, virtually, we join nationally & internationally with people of all faiths & beliefs to give thanks for the life…