“Studying Marketing undoubtedly contributed to the success of the event – I was able to maximise the reach through so many different methods and channels.” 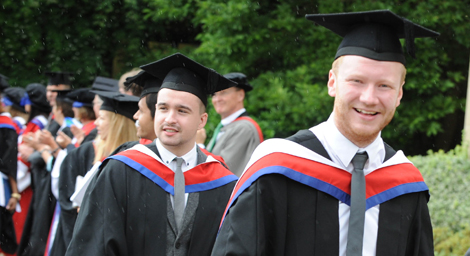 Jack Scott, a former Marketing student who gained immediate employment with the Academic Partnerships team in April, played a central role in sowing the seeds for the historic show’s visit.

“This was his first big event using all the skills gained on his Marketing degree,” said Amanda Krebs, Director of Partnership Operations.

“He developed social media usage for the arts and culture team and has really contributed to the success of the event.”

Under Jack’s guidance, the event blossomed.

“Jack did a fantastic job of ensuring everything ran smoothly even though it was just him,” said Access Partnership Support Officer Jon Rainford.

“The feedback I heard as I was leaving was that everyone really enjoyed the event. It certainly showed the University in a very positive light.”

The horticulture show has become a BBC institution since its inception in 1947, growing to an audience of over two million listeners per week. More than 30,000 questions have been answered during that time, with recordings travelling up and down the country.

Jack said the skills gained on his degree at the University paved the way for a successful evening.

“Organising the Gardeners’ Question Time event was challenging at times but the support from my colleagues was excellent,” he explained.

“We knew it was really important to deliver an exceptional evening for our guests, the majority of whom had not been to the University campus in Bedford before.

“Studying Marketing undoubtedly contributed to the success of the event – I was able to maximise the reach through so many different methods and channels.”

Since Gardeners’ Question Time event Jack has worked on promoting the University’s new sports facilities and the inaugural Roald Dahl Week - a large outreach event aimed at primary schools which has seen bookings soar to over 1,800 pupils thanks to Jack’s inventive marketing.

It’s another example of the professionalism instilled in him by his first-class degree.

“A combination of both studying and work experience helped me secure a job before graduating,” Jack added.

“Since working in the Academic Partnership team, I have been able to use all the skills, knowledge and experience I gained from studying at the University.”

And it’s those skills that helped him make use of the University’s Careers and Employability Service and earn his role as an Events Assistant.

“Jack has only been working with us a short time,” said Amanda. “We have purposefully given him tasks that have enabled him to put what he has learnt during his degree to good use.

“He is a joy to work with and a real asset to the University and any future employer, although I hope he won’t be leaving us just yet!”

Stems for a successful career.

@uniofbeds
There was an amazing variety of student work on display yesterday evening at the @BedsCreative Legacy Degree Show l… https://t.co/SWMHlC8msS

@uniofbeds
RT @uniofbedsnews: Wishing the best of luck to Midwifery student Chelsea Beckford-Procyk (@BlkMumToMidwife) who is nominated for two prizes…

@uniofbeds
RT @uniofbedsnews: "One of our main aims in @BedsCreative has always been graduate success and it's great to see so many of our recent alum…

@uniofbeds
RT @amesos: Great to hear about #machine learning on practice with applications for #COVID19 pic.twitter.com/BCS62fK08D

@uniofbeds
RT @uniofbedsnews: The @BedsCreative end of year Degree Show was featured on @BBCLookEast (West) last night, where they caught up with @uni…