“My aims and goals have constantly changed throughout my time at the University, however one of my goals in my final year was to achieve promotion to the Football League” 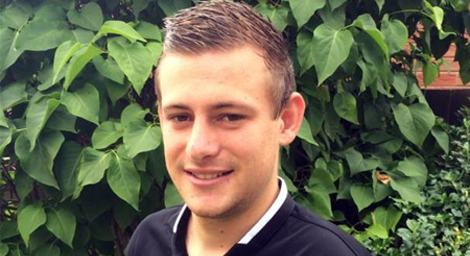 A University of Bedfordshire Physical Education (QTS) graduate has become the youngest person on the Football League list, a database of match officials.

Joshua Smith, 22, earned a dual promotion last season due to his performances both as a referee and an assistant referee.

He has been placed on the National List of Assistant Referees, which means he can run the line for matches at Championship, League One and League Two level, which are the second, third and fourth tiers of English football. He has also jumped up to Level 2B, which will see him referee matches in the two divisions at the sixth tier (Conference North and South).

The new season kicks off on the weekend of August 8 and 9, and Josh can’t wait for the whistle to blow.

“I'm excited about starting the new season and proud of my achievements having worked very hard to get where I am,” he said.

“I'm most looking forward to walking out on my first Football League game as I have been told by others it is a feeling that stays with you forever.”

Josh passed his basic referees course as a 14-year-old in 2007, officiating first of all in the Peterborough and District Youth League.

From there his growing career certainly hasn’t flagged, rising up the levels until he reached the Football Conference (5th tier) last year, officiating matches live on BT Sport.

“My aims and goals have constantly changed throughout my time at the University, however one of my goals in my final year was to achieve promotion to the Football League,” he added.

“With refereeing being such a competitive field my main aim is to ensure that I am able to perform to the best levels possible in every game and continue to enjoy officiating.”

In addition to his on-the-pitch job – which has included international youth matches – Josh will soon start his first teaching post since graduating from Bedfordshire, becoming a PE and Mathematics Teacher at All Saints Academy in Dunstable.

He has already demonstrated his mentoring skills, helping a selection of fellow up-and-coming officials to gain promotion.

“I have coached four university referees who are now level 4 referees operating within the semi-professional game.

“They have worked equally hard to earn their promotion and I am sure they will have a future within refereeing.”

For that, he was awarded the Platinum Performance, Coach and Officials Sport Scholarship by the University in December, ensuring he stayed onside in his refereeing career.

“The Scholarship aided me financially throughout my time at the University as I was able to purchase important equipment to use when I was refereeing, such as electronic flags.

“The free gym membership has also allowed me to continue to progress my fitness levels and ensure I am in the best physical shape to officiate on the Football League.”

Mark Bowler, Course Leader for the BA (Hons) degree in Physical Education (Secondary) leading to QTS, said he’s pleased that Josh will be able to express his passion for sport with the teaching skills learnt on the course.

“Josh balanced his university and officiating responsibilities very well,” he said. “A mature, genuine and popular student, he was graded as 'outstanding' against the Teachers' Standards in his final placement.

“We look forward to him balancing his passions for teaching and officiating as he moves into his first teaching job in September.”

@uniofbeds
See the range of Christmas events being held at our picturesque Putteridge Bury venue over the next few weeks here:… https://t.co/gDAEElWAyU

@uniofbeds
RT @uniofbedsnews: 🤰 "A key learning from this study is the need for #mothers to be provided with specialist support to help them process &…

@uniofbeds
Till 2pm today for the International Day of Persons with Disabilities @BedsSU & our Student Experience team will be… https://t.co/oJbCHwOhqI

@uniofbeds
RT @BedsBiz: December is finally here! Our campus Christmas tree 🌲 is already up and we're all looking forward to the Winter break ❄️❄️ ✨…

@uniofbeds
RT @LLieutenantBeds: Sincere thanks to Rod Calvert OBE DL for representing me at the poignant @uniofbeds tree planting ceremony in Bedford…