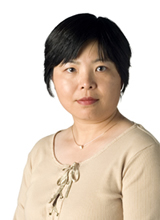 She worked on voice/data networking for several years in NPT, a joint venture of Nortel Networks in China.

She got her PhD degree from Queen Mary College, University of London, in March 2002. Her research topic was hybrid queuing model for fast network performance analysis.

She then worked as a research fellow on an EU IST project in the Centre for Communication Systems Research (CCSR) at the University of Surrey .

Dr Liu joined the University of Bedfordshire in September 2003, and is a Fellow of Higher Education Academy (FHEA).