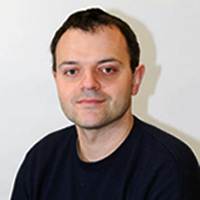 Dr Vladan Velisavljevic received the BSc and MSc (Magister) degree from the University of Belgrade, Serbia, in 1998 and 2000, respectively, and the Master and PhD degree from EPFL, Lausanne, Switzerland, in 2001 and 2005.

From 1999 to 2000, he was a member of academic staff at the University of Belgrade. In 2000, he joined the Audiovisual Communications Laboratory (LCAV) at EPFL as Teaching and Research Assistant, where he was working on his PhD degree in the field of image processing.

In 2003, he was a visiting student at Imperial College London. From 2006 to 2011, Dr Velisavljevic was a Senior Research Scientist at Deutsche Telekom Laboratories, Berlin, Germany.

He joined the University of Bedfordshire as Senior Lecturer in October 2011 and became Reader in Visual Systems Engineering in 2015. He is also Head of the Centre for Sensing, Signals and Wireless Technology (SSWT) since 2014 and Acting Head of Research Institute for Smart Cities (RISC) since 2022.