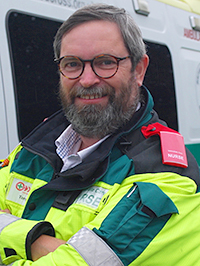 A nurse by profession I come from a background that combines senior positions in clinical practice, education and the medical industry.

I have extensive ongoing experience of healthcare education in formal and informal settings as well as teaching internationally including in the developing world and ex-communist bloc countries in both civilian and military settings.

In addition to this I regularly can be found at a range of different mass gathering events across the south east providing medical cover and clinical leadership.

On a personal level I am married with two adult children, both married. I enjoy travel, reading and family time. I hold a number of senior appointments in the voluntary sector and provide pre-hospital immediate care as a BASICS responder in my locality.

I work in the Post Qualifying Healthcare Education Portfolio within the School of Healthcare. I currently lead the Advancing Healthcare Practice: Concepts and Principles, Simulation in Practice and the Workplace Based Learning Units as well as contributing to a range of other undergraduate and postgraduate units across healthcare and undertake supervision of dissertation students for their Master's awards.

Originally I joined the University of Bedfordshire as a Senior Lecturer in Medical Education I was appointed in September 2011. I have taught over a wider range of medical education units contributing to the MA in Medical and Dental Education.