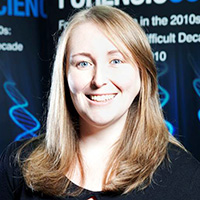 I joined the School of Life Sciences in November 2015, having completed my PhD with the Forensic Research Centre at Northumbria University.

Prior to this, I worked for the Forensic Science Service (FSS) from 2006, firstly as a DNA Analyst in the Intelligence Crime Stain Unit and subsequently as an Examiner with the Homicide & Violence Team, alongside being trained to assist with cases for the Sexual Offences Team.

During my time with the FSS, I carried out laboratory work across hundreds of investigations, examining crime scene exhibits for trace evidence and body fluids, specialising in blood and DNA profiling techniques.

My research interests are focused on the DNA analysis of difficult forensic samples, especially those which are considered as low-template or degraded – I love a challenge! I am particularly interested in building biological profiles from cold case or ancient sample types, having worked on the human remains discovered at the Vindolanda archaeological site and forensic investigations such as the ‘Blazing Car Murder’.

@uniofbeds
Our Community & Faith Team will be holding the University Community's Christmas Carols by Candlelight Services this… https://t.co/Nw4XLL5OdG

@uniofbeds
See the range of Christmas events being held at our picturesque Putteridge Bury venue over the next few weeks here:… https://t.co/gDAEElWAyU

@uniofbeds
RT @uniofbedsnews: 🤰 "A key learning from this study is the need for #mothers to be provided with specialist support to help them process &…

@uniofbeds
Till 2pm today for the International Day of Persons with Disabilities @BedsSU & our Student Experience team will be… https://t.co/oJbCHwOhqI

@uniofbeds
RT @BedsBiz: December is finally here! Our campus Christmas tree 🌲 is already up and we're all looking forward to the Winter break ❄️❄️ ✨…

@uniofbeds
RT @LLieutenantBeds: Sincere thanks to Rod Calvert OBE DL for representing me at the poignant @uniofbeds tree planting ceremony in Bedford…