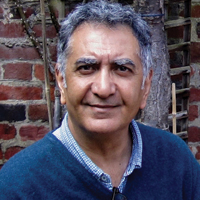 I am a migrant to the UK. I am a qualified social worker. These two aspects have informed much of what I do today. I am interested in the migratory lives of young people who seek asylum in richer countries or are trafficked into and within those countries. Many have faced dangers. Many are frightened. Many are talented and ambitious. They face all sorts of challenges, including a fundamental one of coming back to an everyday life after the death of ordinary living. I try to understand the colours that make up the kaleidoscope of their lives. My work is often about understanding journeys of safety, belonging and success following different types of migration, including forced migration. So for me it’s an honour to help young people to feel that they are understood. My work also helps their carers and law and policy makers to make sense of what to do for the best now that they are together.

My teaching is in relation to refugees and asylum seeking children and young people. I also teach on aspects of qualitative research, and on the application of systemic ideas to professional practices. Currently I am Director of Studies or 2nd supervisor for a number of PhD and Professional doctorate students. 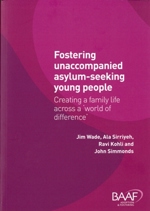 This study was carried out in association with the British Association of Adoption and Fostering (BAAF). It was lead by Jim Wade and Ala Sirriyeh at Children and Young People's Social Work Team within the Social Policy Research Unit at York University.

The study was published in 2012 as Wade, J, Sirriyeh, A, Kohli, RKS and Simmonds, J Fostering Unaccompanied Asylum-Seeking Young People: Creating a family life across 'a world of difference' London: BAAF. View a summary of the report [PDF]

A 30 month evaluation of a Guardianship Service for unaccompanied asylum seeking children and young people in Scotland, run by the Aberlour Trust and Scottish Refugee Council, funded by Diana Princess of Wales Memorial Fund.

This evaluation was conducted in collaboration with Professor Heaven Crawley at Swansea University. View the final report

The Paul Hamlyn Foundation and Unbound Philanthropy are funding the evaluation of initiatives that will enable children and young people who have irregular immigration status access to independent advice and support.

I am working with the Institute for Voluntary Action Research (IVAR) to evaluate the ways help reaches such young people via three key strands – via advice services in the UK, online support, and in reaching out to those leaving the UK

A follow up review to the COI reports for 2008, emphasising the use of the UNCRC in COI report structures and content. The report was jointly authored, with Fiona Mitchell and Helen Connolly.

This evaluation considered whether guardianship could be used to assist separated young people in Northern Ireland. The main report, co-authored with Helen Connolly and Helen Beckett, is available here

The evaluation is funded by the Home Office. It considers the ways specialist independent advocates can support and advise children who are trafficked. Barnardo's is running the trial across 23 local authorities in England.

The results of the evaluation will inform the Modern Slavery Bill as it passes through Parliament. A range of experts in the University, as well advisors in relevant policy and law, are working together on delivering the evaluation

Since the Modern Slavery Act came into force in 2015, the UK Government has been funding the delivery of the ICTA Service in three sites in England and Wales. The Home Office is in charge of the quantitative aspects of the evaluation, and I am leading a team in gathering qualitative data. The final report will be published in 2019.

I was a specialist adviser to the Committee that examined the human rights of separated children in the UK. The Committee report is available here: www.publications.parliament.uk/pa/jt201314/jtselect/jtrights/9/9.pdf

Expert witness to the enquiry into unaccompanied minors in the European Union. Report available here

Evidence given on the Evaluation of ICTAs. London. House of Lords. 15th March 2016.

Review of the Modern Slavery Act 2015

Expert Reviewer - appointed to lead the national review of child trafficking within the Modern Slavery Act 2015. Due to report back to Parliament April 2019

@uniofbeds
RT @uniofbedsnews: Good luck to our two nominees at the @CommRadioAwards tomorrow evening 📻 'On Track in Greensand Country' and 'The Begin…

@uniofbeds
Join us at our Luton & Bedford campus Open Days tomorrow to find out more about life & studying at Beds, chat to ac… https://t.co/Dsycb3BWEA

@uniofbeds
RT @uniofbedsnews: "A privilege to listen to, incredibly insightful, thought-provoking & highly educational" 👏 🗞️We take a look back at th…

@uniofbeds
See our Student, Alumni & Staff profiles as part of our ‘Proud to be Black’ campaign for #BlackHistoryMonth and a r… https://t.co/xctUHD5DLM

@uniofbeds
RT @uniofbedsnews: "I'm #proud to be a Black creative artist and when I see other people of colour making it in the career I'd like to thri…

@uniofbeds
RT @uniofbedsnews: "A semi-professional footballer for three years straight from school, Elliot decided to share his passion for sports and…