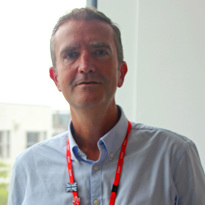 Much of my career has had the key aim of helping others. Prior to retiring as a Police Officer in Bedfordshire I was fortunate to have experienced core functions of response, investigative and preventative policing.

The last roles I had involved developing intelligence systems within Domestic Violence and Community departments before moving on to a central Intelligence office developing serious crime packages.

The challenges presented to Police Officers daily can put them under intense pressure and their actions are now scrutinised more than ever before. It is imperative that officers are equipped and trained to the highest standards to help them make decisions.

Since retiring from Bedfordshire Police I have held a number of positions within education and personal development. I worked with young people caught up in the youth justice system and taught and supported learning in Secondary education and Further education. I have lectured at undergraduate level for a number of years on Crime or Policing degrees at different universities. Some of my previous students are now police officers themselves, whilst others have gone on to study at Post-graduate level. I take immense satisfaction in helping people to start their careers.

In 2020 we had our new Degree in Professional Policing licensed by The College of Policing. Writing the degree has been a significant milestone for my career and also adds real value to The University of Bedfordshire, future Police Officers and people who want to know more about policing. We hope to see more of our students entering the Policing world in years to come.