Director of the Research Institute for Media Arts and Performance 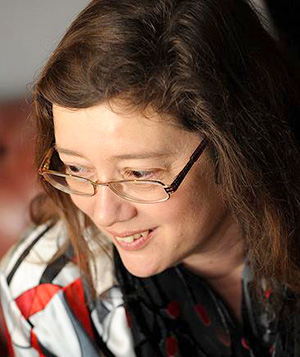 Alexis has been Director of the Research Institute for Media Arts and Performance since 2017.

Alexis completed her doctorate at Oxford University and went into the publishing industry. She was recruited as one of the four Leverhulme funded research fellows for the Cambridge History of the Book in Britain project. In 1995 she co-founded Convergence: The Journal of Research into New Media Technologies with Julia Knight and they co-edited the journal until 2018.

She was founding Head of the School of Culture and Communication (2008-2017) and was Sub Dean Quality Assurance. In 2012 She became the University of Bedfordshire's UNESCO chair in New Media Forms of the Book and this was renewed in 2016. In this role she has contributed to the Humanistic futures of learning: Perspectives from UNESCO Chairs and UNITWIN Networks.

She was principal investigator on the 'Cross-Media Practices in the 1920s and 1930s' project researching the role of authors in the early days of writing for the radio and for film (2005-2009) and co-authored Elinor Glyn as Novelist, Moviemaker, Glamour Icon and Businesswoman (2014) as a direct result of the project. In 2016 she received a fellowship at the Harry Ransom Center, Austin Texas to work in the archive on early examples of transmedia authorship in the work of Clemence Dane and G.B. Stern, A.E.W Mason, Hugh Walpole, and the Selnick archive. Her research in new media forms of the book ranges from 'Books as Media' chapter in the Cambridge History of the Book: The Twentieth Century to augmented reality books.

She is a specialist in the use of quantitative methods in the study of the industry. She has a chapter in Blackwell's Companion to Book History on the topic and a historical essay on the economics of publishing in The Oxford Companion to the Book. She edited the five volume collection The History of the Book in the West (Ashgate 2010). She has recently presented keynotes at the Love Across the Atlantic (2018) and the Australian Media Traditions Conference (2019).

In 2013 Alexis led the practice-led research group for 'Sherwood Rise' a research inquiry into the AR book is designed and realised by David Miller, story written by David Moorhead. Her work in new media storytelling has lead to consultancy with sole-traders, local SMEs and larger publishing and design agencies on applying mobile and digital innovation in their business.

She welcomes applicants for PhD study or collaborative research projects in the broad areas of cross-media publishing, new media and related areas (new media writing, gaming, publishing) related to twenty-first century industry challenges or UNESCO SDC goals. She also invites PhD applications in book history and literary production, economics of publishing and adaptation in the nineteenth and twentieth century. Application to work on writers or agents working across media such as Elinor Glyn, G.B. Stern, Clemence Dane, Hugh Walpole and A.E.W. Mason or others are especially welcome. She has been director of research for five post-doctoral research fellows and welcomes visiting scholars across these fields.

Refereed articles and book chapters since 2014

Sole authored except where specified: