‘Think about organ donation’ call from professor at launch of campaign

THE lack of organ donation among minority groups was highlighted at a campaign aimed at raising awareness.

More than 70 people from different ethnic and faith communities attended the event held in collaboration with the Luton Community Health Forum.

People from BAME communities are more susceptible to kidney problems caused by diabetes and high blood pressure but nearly 70 per cent of BAME families in the UK refuse consent to donate organs.

"This large shortfall in suitable organs can mean that BAME patients can wait much longer for transplants and are more likely to die waiting," Prof Randhawa said.

"This underlines the need for greater engagement with BAME communities to increase awareness and donations and prevent the conditions that lead to organ failure."

Among the guests was Bedfordshire graduate Ottilie Quince, who received a kidney from her mother in 2007, and has gone on to become a cycling champion at national and international transplant games. 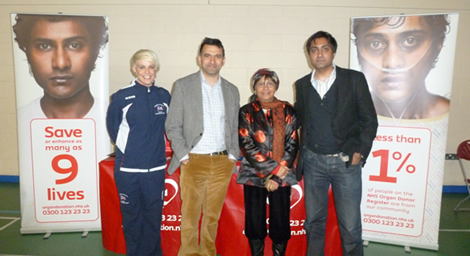 She said: "My life has been transformed since receiving a transplant. I have won several gold medals in cycling at the transplant games and lead a full and active life."

Another guest, Bobby Mudhar, whose family made the brave decision to donate his brother Mandip's organs after he was killed in a road traffic accident.

Bobby said: "Prior family discussion and our Sikh faith helped us to reach the decision to donate Mandip's organs.

"I was delighted to share my story at this awareness raising event. "Prof Randhawa is a member of the Black, Asian and Minority Ethnic Transplant Alliance, which was launched last year by the Department of Health, in an attempt to change attitudes to donation and transplantation within those communities.