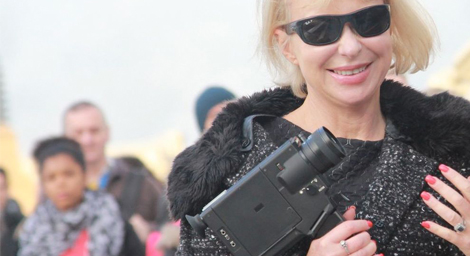 A film produced by the University of Bedfordshire’s Reader in Film Practice and Theory is to premiere on Polish television this week.

“The film is clearly a piece about the contemporary history of Poland but is also an essay about the difficulties of making a serious documentary film about real people,” said Dr Piotrowska.

“Sometimes we forget how hard it is for people to deal with the process of filmmaking and somebody taking hold of the narrative of their lives and presenting it to the world.

“My collaborator, Kuba Pieleszek, and I spend the whole film trying to get an interview with the elusive Lech Walesa. In some ways it [the film] is a comedy of errors and a kind of documentary thriller.”

The film, made in 2013, draws on Dr Piotrowska’s academic work, such as her book entitled Psychoanalysis and Ethics in Documentary Film.

Funded by the European Centre for Solidarity, the documentary was screened at a number of festivals across the globe last year.

The film's co-producer from the European Centre for Solidarity, Anna Mydlarska, said: “It was a delight to be working on this film with Agnieszka. We are very proud of it and hope to be screening it at our centre in 2015.”

@uniofbedsnews
"A semi-professional footballer for three years straight from school, Elliot decided to share his passion for sport… https://t.co/Z7E2dTikRD

@uniofbedsnews
🥇 Our staff and students are up for two awards! 🥇 Two @uniofbeds productions are nominated for awards at Saturday'… https://t.co/6VM2e0lD8a

@uniofbedsnews
RT @SlaveryPEC: Working with young people is key to one of our new projects, being led by @uniofbedsnews The project seeks to identify wh…

@uniofbedsnews
Congratulations to @uniofbeds PhD student Rohit Sagoo who won the Leadership Award at the Royal College of Nursing… https://t.co/gdzjId14NY