The students undertook the challenge as part of their assessments at the University of Bedfordshire.

First up was Media Performance graduate Sam Darlaston, who graduated in July 2015. Almost immediately after graduating, Sam was chosen out of thousands of applicants, to be the new TV and Radio presenter at KISS FM.

Sam commented: “It’s cool because the course changes in ways but in the main ways it doesn’t.

“It’s all formatted similarly to when I was here, so when I look back, I remember how nervous I was for that or I remember how I couldn’t put a mic on. It’s weird seeing people going through similar situations.”

Shavani Seth, an actress who has been in shows such as Youngers and the hit US TV show Homeland, also joined the Media Performance students onstage, covering topics as broad as her career to how much she loves cake.

Commenting on her interview, Shavani said: “It was really professional. I’ve had interviews that were terrible, and they were of a professional level.

“This was at a university and it was better than some of the press stuff that I get. So yeah, it was incredible.”

Kathryn Wolfe, Senior Lecturer in Media Performance and Course co-ordinator for Television Production said: “This assessment day is realistic learning at its best; it’s exactly like it would be in the industry. When we go live there is no turning back, no stopping, and the students work together as a team to ensure that the show gets on the air and stays on the air.

“I am incredibly proud of their skills and efforts. Year 1 TV students have only been with us a few months and already they can produce excellent quality live TV.” 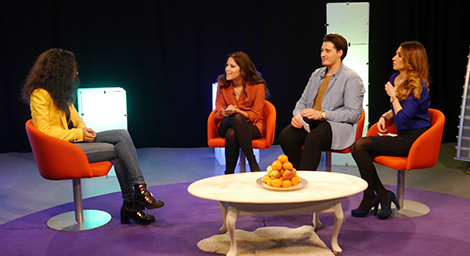 Former student and Kiss FM presenter Sam offered some welcome advice to the University’s current cohort: “Just don’t give up!

“I think it’s easy to get put off by people saying only certain per cent of people make it or only this per cent do this or this per cent do that. But if you’re strong headed and you want to do something, then just completely be yourself and keep going at it”.