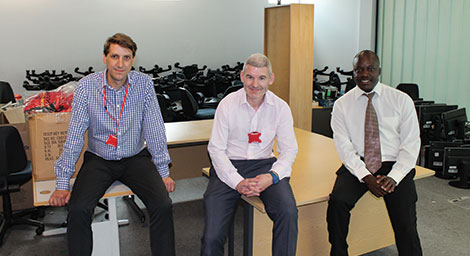 The University of Bedfordshire has helped a former student fulfil his father’s dream of building a library in his local community in Africa.

Mike Kasibo’s father was a teacher and saw a need for a library in his native Uganda and even bought the land to build it on.

“Academic levels in the community were going down. There were not enough books in the schools and there was nowhere for people to sit down and read,” said Mike, who studied Applied Social Studies and graduated last year.

Sadly Mike’s father died before he could start the project. Knowing how important it was to him, Mike took up his father’s cause and managed to build the library, but still needed equipment like books and furniture to make it usable.

Mike, 38, who now lives in Milton Keynes, approached the University for help.  As luck would have it, the University had just built a brand new library on the Luton campus, leaving the old one full of equipment that was no longer needed. It was quickly decided that Mike should take whatever he needed for his own library.

Head of Library Development at the University Leo O’Neill said: “So far we have donated over 400 chairs, 300m of library shelving, 40 tables, books, book trolleys, stationery, computers, monitors and laptops to Mike and his project.

“Hopefully we will also be able to send the air conditioning units, carpet tiles and lights to Uganda once the demolition of the old library starts. This is a very worthwhile project which will hopefully build close ties between us and communities in Uganda.”

“These things will help us create an enhanced learning environment. People will also have access to computers which will help them learn important IT skills. I’m so grateful to the University for donating all these things,” said Mike, who is hoping to have the library up and running in early 2017.

“It would have been very difficult to finish the library without the help of the University,” said Mike. “There was a point where I couldn’t see a future, but this had made such a difference.”