A British filmmaker and academic from the University of Bedfordshire is preparing for the world premiere of her first feature film on 4th October at the Zimbabwe International Film Festival in Harare.

Escape: a film noir fairy tale is also the first feature film by Thinking Films, a joint venture by Dr Agnieszka Piotrowska from the University’s School of Media and Performance, and one of Zimbabwe’s premiere filmmakers Joe Njagu. Njagu was recently awarded the prestigious Nelson Mandela Fellowship, allowing him to spend time in the USA. The film is produced and written by Dr Piotrowska and co-directed with Joe Njagu who is also the film’s Director of Photography.

Escape is a film noir fairy tale. It offers a modern mythological narrative where you need a femme fatale, witches, a princess, enigmatic phrases and a deathbed confession. The film also touches upon issues of identity and race, as they affect those of mixed race, which is the case of our main character.

Blending Hollywood mythology with African beliefs, the story follows Charles, a mixed race man in his twenties who discovers that his mother lied about his father’s true identity. On her deathbed, she urges him to go to Zimbabwe and find his father. 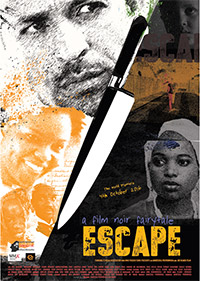 “The process of making the film has been an extraordinary adventure and I hope that our story will be enjoyed in Harare and in due course also available in the UK and elsewhere. Working collaboratively with the amazing artists in Zimbabwe has been a real privilege.

“The film is our way of building cultural bridges while still providing entertainment. I hope that this cross-cultural project and collaborative effort will be appreciated by audiences globally. I also hope my students will enjoy it.”

Dr Piotrowska is an award-winning filmmaker best known for her iconic documentary, Married to the Eiffel Tower. Having already carried out in-depth research for her book, called Black and White: Cinema, politics and the arts in Zimbabwe (which is forthcoming later this year with Routledge), she was inspired to go beyond her proven expertise in documentary and branch out into feature-length fiction.

The film has a truly international dimension with a production crew made up of individuals from Zimbabwe, Poland, Germany and the UK. The film’s editor is Anna Dobrowodzka who is the graduate of the world famous Lodz Film School in Poland which spawned such luminaries as Roman Polanski, Agnieszka Holland and Krzysztof Kieslowski.

“I hope this will lead to further collaborations with the film school in Lodz too,” said Dr Piotrowska who is of Polish origin.

Prior to Escape, Dr Piotrowska’s had her short film Forbidden Love (also produced with Njagu) screened internationally and most recently in Oslo. The film was part of a research project looking at the postcolonial legacy as it impacted personal relationships. It follows the true story of German scholar Flora Viet Wild and Zimbabwean novelist and poet Dambudzo Marechera during the early 1980’s in Zimbabwe.

Thinking Films also produced an award winning documentary Lovers in Time (2015) which won prizes in India, Indonesia and Africa and has been screening around the UK at different venues in including the Political film Festival in London in December 2015.