University library is excellent for sustainability 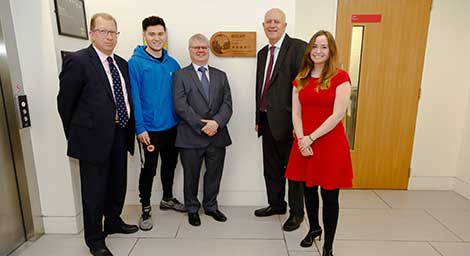 The University of Bedfordshire’s library has received an award of excellence for its environmental performance.

The Building Research Establishment Environmental Assessment Model (BREEAM) award was given to the £46 million library on the University’s Luton campus, in recognition that it has met the best practice standards for environmental performance of buildings through its design, specification, construction and operation.

Since construction began in 2014, the sustainability of the new library has been high on the agenda, with a target of a BREEAM excellent rating – which has now successfully been achieved. To get a rating of excellent the building scored more than 70% of the total available scores against the BREEAM methodology. 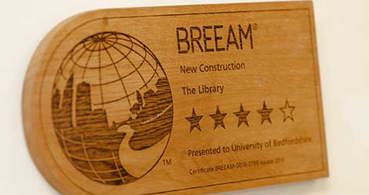 Bill Rammell Vice Chancellor at the University said: “We are delighted with this award. It is great to see that the commitment we have put in to tackling sustainability here at the University of Bedfordshire has been recognised.”

Despite the creation of new facilities, including the library, the University has still managed to considerably reduce its carbon emissions.

Designed by mosescameronwilliams architects and built by Willmott Dixon, the library opened in October 2016. The highest standards of sustainable design and construction were put in place to ensure its environmental performance. These included:

The University received a plaque to mark its success in meeting the standards of excellence for the BREEAM award.

BREEAM first launched in the UK in 1990. It sets best practice standards for the environmental performance of buildings through design, specification, construction and operation.

@uniofbedsnews
RT @NHSuk: Join the millions across the UK who have safely received the COVID-19 vaccination. Don't delay in getting your vaccine when it's…

@uniofbedsnews
A @uniofbeds alumnus saw the need for an easier way to find business accommodation during the #COVID19 pandemic. S… https://t.co/xptJGoGcLG

@uniofbedsnews
"We feel fortunate to have been allocated a trainee teacher from @uniofbeds. The strong partnership we have with… https://t.co/XSW9folx2P

@uniofbedsnews
"Managing pandemics is about understanding how to strategically work with the public, to build trust that motivates… https://t.co/rxrShyPW0J

@uniofbedsnews
RT @uniofbeds: Join us for the next Bedfordshire Health & Social Care Academy @BedfordshireHSC Leadership Seminar on Wednesday the 28th of…

@uniofbedsnews
RT @KeechHospice: Ever thought of designing your own elephant? 🐘 With the @uniofbeds competition you can do just that! Take a look at their…

@uniofbedsnews
RT @uniofbeds: Fancy designing our second elephant for the @BigTrunkTrail for @KeechHospice? 🐘🎨 Find out more about both our elephants, the…