A University of Bedfordshire student has set her sights on becoming the first female Premier League referee.

At 20 Mary Harmer is the youngest female Level 4 referee in the UK and therefore the highest qualified at her age. 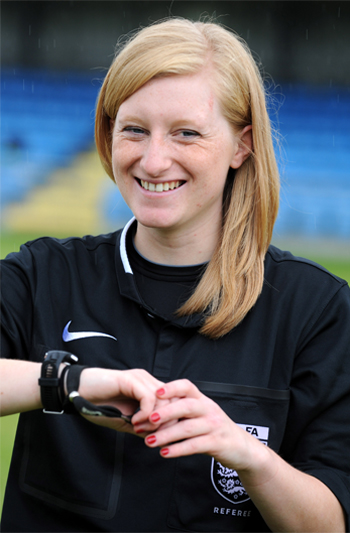 It means she can officiate semi-professional games (supply leagues) and act as an assistant referee, in the Women’s Super League and in other contributory league matches such as the Southern League.

Following making such a dramatic rise through her career to-date the Sport and Physical Education student has set her sights on the highest form of the English game and join fellow female assistant ref, Sian Massey, in the Premier League.

“I started refereeing aged 15. My career highlights to-date include being appointed to England Under 17s vs Denmark Under 17s, as well as being an assistant referee in a match involving the Women’s FA Cup winners. I also travelled to Portugal to represent Bedfordshire FA at the IBER Cup, an international youth tournament featuring some of the best sides in Europe where I refereed the Girls U17 final, Paris Saint Germain vs Athletico Madrid, which was a massive milestone in my journey as a referee.

“Being at this level is starting to get serious, and exciting! Now that I have a taste for some important games at a lower level I only want to push myself further.

“It would be amazing to be the first female Premier League referee – the opportunity is most certainly there!

“I’m living the dream at the moment. I never thought I would get this far so quickly. I progressed from being a Level 7 referee to Level 4 within two years.”

Mary, who originates from North Walsham in Norfolk, began her interest in refereeing at Aylsham High School whilst completing her Duke of Edinburgh Award. 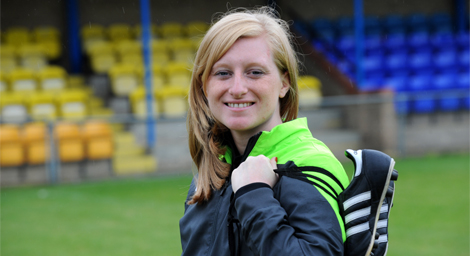 Today alongside her studies, and match time, she has recently completed an internship with Bedfordshire FA as Referee Development Manager and says she would like to take this forward in the future.

“Being at University has been fantastic. Originally I was unsure about whether to go into higher education, it was out of my comfort zone and I really didn’t want to move away from home. But I received a lot of encouragement from my parents and looking back it was the best decision I have ever made. It has had a massive effect on my life and increased my overall skill set. I was very grateful for the opportunity to volunteer at Bedfordshire FA during the summer – the role was something I loved. I am passionate about taking this forward later after graduating to help more referees like myself progress.

“Also at the University, I’ve recently applied for the £1,000 Platinum Scholarship – recognising students’ sporting achievements at a national level – which, if accepted, will help with my travel to matches, and equipment for the year.”

Bedfordshire FA is helping Mary progress through the referee Levels with its Referee Development Group – a comprehensive coaching support programme for on the field (technical and physical fitness) and off the field (psychological and social-behaviour guidance) support.

Dan Robathan, Bedfordshire FA Chief Executive Officer, said: “We have aspirations for Mary to become a FIFA official and I am confident her desire, attitude and resilience will see her reach these heights of the game.”