The city is set to grow considerably over the coming years, and its energy supply, transport and water capacity need to keep pace with that growth. The Data Hub, hosted at UCMK, will allow that growth to be led by good data.

“This new data hub will enable better business and consumer decision-making, create greater efficiency in the use of energy and water resources, fuel innovation, and empower and engage citizens through educational initiatives and access to information,” said Bill Rammell, the University’s Vice Chancellor welcoming guests to the opening.

Also speaking at the event, which included an exhibition of smart city applications, was Peter Horrocks, Vice Chancellor of the Open University, Enrico Motto, Project Director at the Open University and Cllr Peter Marland, Leader of the Council in Milton Keynes.

The Data Hub is at the centre of the collaborative MK:Smart project. Partially funded by the Higher Education Funding Council for England (HEFCE), it is led by the Open University and involves a number of industry and education partners including BT, Cambridge University and Milton Keynes Council.

The project aims to improve the lives of citizens in Milton Keynes as well as supporting the growth and development of businesses within the city. The data that will be collected will be invaluable; simply detecting free parking spaces and making that data available would reduce the number of drivers trying to park - estimated to be up to half the cars in a large city.

Mr Rammell said: “Across the world communities are facing challenges of energy sustainability, transport, education, delivery of public services and citizen engagement. But what we are creating here at Milton Keynes is unique to us – unique solutions driven by the unique insights and innovation capabilities produced by unique datasets.”

Guests also had the opportunity to hear about and view the Apex Suite which is situated at UCMK. It is a purpose built facility which supports collaboration with local businesses and allows them to access data from the Hub and then build applications which can directly feed into the MK:Smart project. 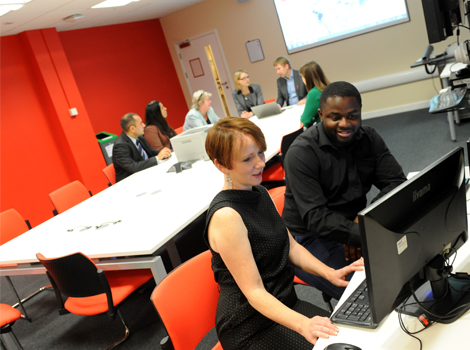 They also heard about the work UCMK is doing with local schools and businesses and got a flavour of the newly expanded facilities for students at the University; including high specification teaching rooms, an expanded library, and a new café.

The University has put employability at the heart of its offer to students with many of its undergraduate courses including a 12-week placement with a local business in Milton Keynes. It also has announced a £1,000 Student Bursary for new first year UK or EU students who are entering full time undergraduate degree programmes.