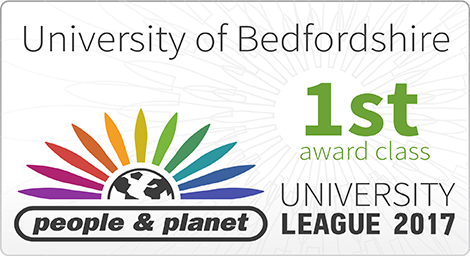 The student-led league table ranked 154 universities in the UK on their green prowess, awarding Bedfordshire a First Class degree for its eco-friendly practices.

Bedfordshire was recognised for the significant reductions it has made in its carbon emissions as well as for its efforts to embed sustainability into the curriculum. Most recently students were given the opportunity to take part in a Climate Change event, including a mock UN debate where software deployed by official UN climate change negotiators was used to generate real time impacts of carbon targets on carbon dioxide concentrations, temperature and sea level.

The University was also one of the first in the UK to divest from fossil fuel investment and is to sign a pledge later this year formalising that commitment.

This is the 10th year People and Planet has published its league table with the aim to make transparent the sustainable development of publically funded universities. Bedfordshire has seen its position rise dramatically over that period; originally placed at 124th it rose to 11th last year, and now in 6th position, places above all the Russell Group universities.

Bill Rammell, Vice Chancellor of the University said: “I am extremely proud that we have been recognised for our green policies.

“We work with all our stakeholders to reduce the University’s environmental impacts and promote sustainability thinking, education and practices for our current and future graduates, staff and communities.

“We also recognise our responsibility to ensure that our graduates have a sound understanding of the importance of sustainable development to enhance their role as global citizens and their future employability.”

@uniofbedsnews
RT @beds_ed: BA Applied Education Studies is focused on developing the knowledge and expertise to become a qualified teacher. We would love…