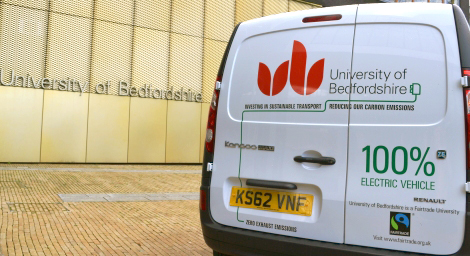 The University is running three electric vans, two Renault Kangoo ZE and one ZE Maxi – as part of plans to reduce its carbon footprint.

The vans, are used daily by the Facilities and Estates Department, Putteridge Bury Conference Centre and the University Post Room and are charged using electric vehicle charge posts, which can charge two electric vehicles at once.

The vans come with domestic charge cables so can be charged from an ordinary domestic three-pin socket as well as from the four fast charge posts the University has installed on its campuses. 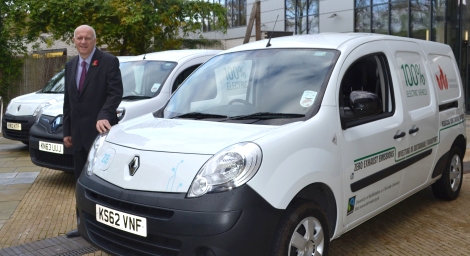 The charging posts were installed with financial support from Luton Borough Council and Government grant money from the Office of Low Emissions Vehicles (OLEV) Plug-in Van grant scheme There are now around 13 charging posts in the South Bedfordshire region. Each van also received a £5,000 subsidy from OLEV. 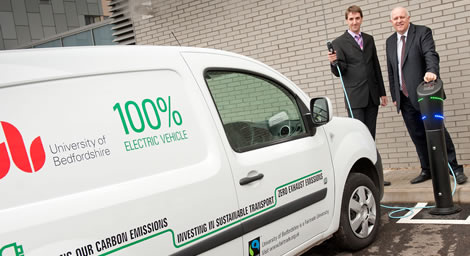 The charging points are also available for use by students and staff.

Vice Chancellor Bill Rammell said: “This is the right thing to be doing. It’s a great initiative to reduce our carbon footprint but it’s also vital for the University to help us move up the Green League table. Sustainability is one of the factors that potential students consider when choosing a university and it’s positive that we are trying to reduce our carbon emissions.”

The University’s Head of Environmental Sustainability Adam Higgin said: “The vans are helping to reduce the University's annual carbon emissions by using electricity, and have considerably less carbon dioxide emissions per mile than a diesel equivalent van. They have travelled 33,171 miles since we bought the first one in 2012”.

"The vans also have a reduced running cost, as they have a fuel consumption cost of around 3 pence per mile to run in comparison with an average of  nearly 30 pence per mile for the diesel vans they have replaced. The van for Putteridge Bury Conference Centre replaced and old 16-seater mini bus which only got 11 miles per gallon, which is very inefficient."

“The vans are automatic and a pleasure to drive. I would compare it to driving a silent go-cart. They have a range of around 70 to 80 miles, which means they can easily reach all our campus locations.  The vans can drive distances of up to 80 miles on a single charge and they take around four hours to fully recharge. They are easily capable of motorway speeds, but we have decided on a maximum of 56mph for fuel efficiency, and to enable extended range on a single charge."

"We are confident the vans will contribute to a reduction in traffic fumes and noise pollution in Luton,” said Mr Higgin. 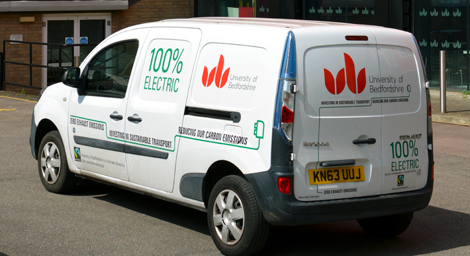