By Chris Papadopoulos and Nasreen Ali, Department of Clinical Education and Leadership, University of Bedfordshire

There is increasing evidence that university students are particularly susceptible to feelings of stress. Given that many post-graduate healthcare students work with patients, the negative outcomes associated with feelings of stress may also impact upon the patient population. This study investigated the prevalence and risk/ protective factors of self-perceived stress among 43 international public health post-graduate students. Results revealed that almost all participants scored in either the moderate or high stress level category, with South-Asian students scoring particularly high stress scores. Headache frequency, sleep duration and feeling the need for a holiday were the explanatory variables most strongly associated with stress. The results support and add to previous literature which suggests that international students are particularly susceptible to feelings of stress. Suggestions on the management and prevention of stress are proposed, while ideas for future research to build upon this study's findings are considered.

Public health students and other healthcare students are susceptible to the same problems that other students face, including burnout, pressure to succeed, financial concerns, and feeling isolated from home. However, given that many of these students are either currently healthcare professionals or will be at some point in the future, we need to ensure that this workforce is able to practise safely and competently. The existence of mental health problems among healthcare staff jeopardises this and may also lead to risks for their patients.

Therefore, the aim of this small scale study was to measure the levels of perceived stress among MSc Public Health students. A secondary aim was to investigate various potential risk/protective factors of stress in order to form recommendations about coping strategies and to provide a basis for the direction of future research.

The study's outcome measure was the 'Stress Questionnaire' (International Stress Management Association, 2012). This questionnaire consists of 25 statements to which participants can either respond 'yes' or 'no'. By answering 'yes' to a particular statement, one 'stress point' is accrued. The questionnaire classifies participants who accrue a total between 14 and 25 stress points as having entered the 'high stress' threshold. As such, they are particularly prone to stress and stress-related illness, and should seek professional help and/or stress management counselling. Participants who accrue 5-13 stress points fall within the 'moderate stress' threshold and are likely to experience stress-related ill health and would benefit from stress management counselling. Accruing 4 stress points or fewer places participants in the 'low stress' category. Such people are considered the least likely to suffer from stress-related illness.

During the workshops, students were asked to complete an anonymised online questionnaire (created using the online survey software 'Qualtrics'). The data were then immediately pooled into an IBM SPSS 19 database and distributed to the workshop students. These students then used the dataset as a learning tool (including learning more about the SPSS database environment and how to run various statistical tests). A week after the end of the July 2012 SPSS workshop, all attending workshop students were emailed to enquire whether they would be happy to provide their retrospective informed consent to having their questionnaire being used as part of this study. An announcement was also created on the University's virtual learning environment, which provided the same message.

All descriptive and inferential statistical analyses were run using IBM SPSS (version 19). Responses to the Stress Questionnaire's 25 statements were summed to calculate a total stress score. Given the nature and size of the sample, non-parametric Mann-Whitney U tests of association were carried out using binary independent variables and the study's dependent variable which contained continuous data. Independent variables with continuous data were categorised into binary variables using median cut-off values.

Forty-three students attended the SPSS workshops (21 students attended the SPSS workshop in July 2011, and 22 attended in July 2012), all of whom provided their retrospective informed consent. Nineteen were males (44%), 24 were females (56%), and the median participant age was 28 years (minimum = 23 years, maximum = 45 years). Ten students described their ethnicity as South Asian (23%), 30 described themselves as African (70%), 2 were Greek (5%) and 1 participant described their ethnicity as British (2%). Thirty-four of the participants were from the October cohort (79%) and 9 were from the February cohort (21%). Please see Table 1 for a full breakdown of all socio-demographic and background descriptive data.

As can be seen in Table 2, students who classified themselves as 'worriers' scored the highest median stress score, followed by those who reported sleeping less than 8 hours a day, students unsatisfied with their personal study environment, and students who described their ethnicity as South Asian. As can be seen in Table 3, strong significant differences in stress scores were revealed within the sleep length, holiday need, and headache frequency variables. Weaker but nevertheless meaningful differences in stress scores were found within the ethnicity (African vs. South Asians) and in relation to the question, 'Are you a worrier?'

The results revealed that the SPSS workshop participants, in general, experienced a moderate-high level of stress. This is a worrying finding given the range of negative consequences that stress has for mental and physical health. It is therefore not surprising that higher stress strongly associated with headache frequency, sleep duration and holiday need. These findings also support previous research; Lund et al. (2010) found that stress levels strongly predicted sleep quality in a sample of 1,125 American high school students, while Nuallong (2011) reported that stress levels were strongly associated with headache frequency among 183 Thai medical students. Both Koh et al. (2012) and Cohen et al. (2000) have reported that stress levels among medical students are significantly lower after a holiday period. It is also unsurprising that the students who described themselves as 'worriers' scored significantly higher stress scores than 'non-worriers'. The association between worrying and stress is well documented. For example, Chung & Lee (2012), who surveyed 430 Korean university students, have also found that 'worrying about academic achievements' strongly correlated with higher stress scores. Szabó's (2011) cross-sectional study of 126 Australian university students revealed that worrying has a unique positive association with stress, significantly over and above the associations that both anxiety and depression have with stress.

Particularly concerning was that a third of the sample's scores crossed into the 'high levels of stress' threshold. This is a higher level than what is reported in most other previous research studies investigating university students' mental health. For example, Backović et al. (2012), who surveyed 670 home-based Serbian medical students in their fifth and sixth year, found that high stress levels were associated with 14.2% of the sample. Andrews & Wildig (2004) revealed that 20% of 351 UK-based undergraduates in their second year reported clinically significant anxiety levels. Amr et al. (2008)'s cross-sectional study of 311 home-based Egyptian medical students found that 20.3% felt highly stressed. Bewick et al. (2008), who surveyed 1,124 students from four UK higher education institutions, found that 29% of students held clinical levels of psychological distress – a similar level but nonetheless lower than in this study. The most obvious interpretation for such high stress scores reported in this study is that international post-graduate students may be particularly susceptible to the stresses associated with student life. International students have to cope with not only all of the regular stresses of student life but also the weight associated with adjusting to life in a new host culture (Mathew & Sapsed, 2012). In many cases they must deal with these burdens without the same level of support that their family, friends and community would ordinarily provide in their native countries. Interestingly, this study's South Asian international students produced considerably higher stress scores than their African counterparts (a difference which was close to being significant). The implication here is that African international students cope with the demands of student life and acculturation more effectively than South Asian students. The validity of this finding, and the reasons for it, clearly require further investigation.

The results of this study indicate that a substantial proportion of MSc Public Health students experience a high level of stress. They also suggest that international students are particularly susceptible to the burdens of student life, perhaps more so than home-based students. Therefore, effective measures which prevent high levels of stress from developing during the course need to be ascertained. This study's findings strongly suggest that we should, at a minimum, re-emphasise the importance of sleeping well and making good use of holiday time during the course. Suggesting methods of controlling and managing feelings of worry may also be useful; indeed, there are many effective cognitive-behavioural therapy self-help techniques available to draw from that can be recommended to students. Students should also be regularly reminded of the range of student support services available to them if they are feeling stressed. To limit the impact that stigma may have on the uptake of these services, it must be made very clear that university support services take confidentiality very seriously, and are used to supporting culturally and ethnically diverse students. However, given the small sample size, the sampling biases, and the uncertainty associated with the Stress Questionnaire's level of validity, this study's findings and their interpretations should be treated with caution. Direction of causality also cannot be determined due to the cross-sectional research design. Clearly, future methodologically rigorous research is necessary to follow up and investigate this study's findings further. A study which investigates whether and why African international students cope better with student life than South Asian international students is particularly welcome. Such future research is vital towards furthering our knowledge on how an unhealthy level of stress can be avoided. This is an important objective as by doing so, the range of damaging mental and physical consequences for student health can be minimised.

*Binary categorisations based on median values 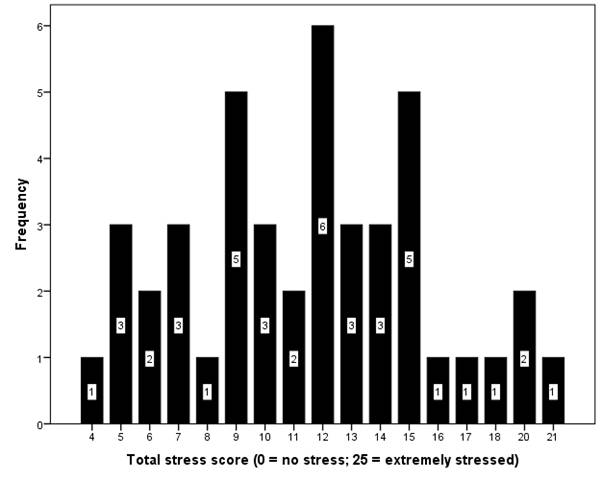 @UniBedsAcademy
Today's the day! Just over 45 minutes till the opening of our inaugural Learning and Teaching Excellence Conference… https://t.co/oSsHpr1SeC

@UniBedsAcademy
Come and work with us! Lecturer in Academic Practice role available: https://t.co/w4hfadipOP

@UniBedsAcademy
RT @insidehighered: While wellness and mental health initiatives are often thought of as separate from academics on college campuses, the t…

@UniBedsAcademy
Come and work with us! We're looking for a Senior Digital Learning Officer: https://t.co/cLtPh9ptHJ

@UniBedsAcademy
Congratulations to our first batch of successful Apprentices on the Academic Professional pathway! A long, Covid-st… https://t.co/xIHj0vKWRL