Spatial designers use sketch perspectives as a design development tool because they can offer a powerful means of representing physical form on a flat surface. However, whilst perspectives can depict the appearance of a building, they do not describe it as a narrative sequence of events and experiences. Storyboards can do this because they enable a scheme to be investigated and represented in a multi-sensory and dynamic way, but students can find them difficult to use effectively. The University of Bedfordshire's innovative 'Brands and Movie-Making' project addresses this by requiring its spatial design undergraduates to make experimental movies, providing a powerful vehicle for the development of storyboard-drawing skills and a firm base for the discipline-specific work-to-come. But its effectiveness is limited because the students appear reluctant to draw by hand, and this will be investigated further.

This paper concerns the sketches spatial designers use to investigate the experiential characteristics of their design proposals. It focuses on perspectives because these are regarded as the most potent means of communicating ideas (Dernie, 2010), but it contends that they show buildings from a fixed viewpoint, describe only visual characteristics, and restrict the extent to which narrative and environmental qualities can be explored. It reveals that storyboards do not have this restriction, but that students sometimes find them hard to use effectively. It appraises an innovative response to this difficulty, devised by the University of Bedfordshire's Spatial Design cluster[1]: the 'Brands and Movie-Making' project. This seeks to enhance the Stage 2 students' grasp of how to use storyboards to investigate experiential and material characteristics by requiring them to make short experimental movies. It intends not to turn these undergraduates into media students but into better spatial designers.

The paper begins by investigating the underpinning pedagogy and discussing how and why perspective drawing has been augmented by storyboards. It then identifies the key challenges faced by students attempting to use these for design development purposes, summarises the main components of the project brief, reports on the course team's analysis of students' work to-date, and outlines further developments proposed.

For most designers, drawing is essential (Tversky, 1999). Spatial design practitioners produce a wide range of drawings for use by other people (Styles, 1998; Robbins, 1994; Lawson, 2005; Reekie and McCarthy, 2007), and also for use by themselves as they develop their design proposals (Robbins, 1994; Tversky, 2002; Reekie and McCarthy, 2007). Generally hand-drawn (Yi-Luen Do and Gross, 1996; Schenk, 2005; Mitchell, 2011), these images '…are 'the designer's principal means of thinking'' (Yi-Luen Do and Gross, 1996, p. 1 – quoting Herbert from 1993). Amongst them, perspectives are defined as: '…the single most powerful tool to communicate a project' (Dernie, 2010, p. 124), but they have key limitations: Berger informs us that they allow people to see things only as a stationary onlooker (Berger, 2008) and Aroztegui et al. explain that they convey only visual content (Aroztegui et al., 2010). Traditional perspectives might indicate 'more or less the actual appearance' of a building (Reekie and McCarthy, 2007, p. 161 – author's italics), but they do not explain what the building will actually be like, as a sequence of experiences, encounters, events etc. Seeking a substitute for, or addition to, them, designers have adopted a range of lens-based/inspired techniques, among the most powerful of which, in our opinion, is the storyboard. Storyboards are images that record activities and experiences as a narrative (Sova and Sova, 2006; Aroztegui et al., 2010). They are usually perspective drawings but with text and icons added to explain actions, incidents or other information (Sova and Sova, 2006).

Storyboards are now used within spatial design education – for example, Unwin (2001) cites their role in the Welsh School of Architecture's Stage 1 syllabus, and we have employed them at the University of Bedfordshire since 2003. However, for several years, many of our students implemented them with little success, producing images that were, in our opinion, crudely drawn, and frequently no more helpful than the perspectives that they were intended to supplement. As a consequence, the students' design proposals were disappointing. The course team conducted an investigation into the reasons for this and discovered that the students were finding it difficult to grasp the function of storyboards, and thought of them as additional perspectives rather annotated sketches that should explain their work as a sequence of experiences and activities.

We introduced this project, inter alia, to help our Stage 2 spatial design students understand the purpose of storyboards. It requires them, working in teams, to create short experimental movies. It begins by offering the students a shortlist of, in our opinion, high quality and idiosyncratic motion pictures that all have a clear brand identity[2]. Each team chooses one of these and studies it carefully in order to identify three one- or two-word statements (termed 'brand values') that characterize it. The teams then employ these brand values to make their own experimental movie (which must not copy the original). This requires them to use storyboards to explore materials, colours, props, costumes, lighting qualities, acoustic qualities, space utilisation etc. The teams must then do their own filming and editing, and 'premier' the final movie in front of an audience of peers. Staff from elsewhere in the University provide instruction on how to use appropriate movie-making hardware and software, and on film-making practice.

This project does not aim to turn spatial design undergraduates into media students, but into better spatial designers. We believe it does this by, inter alia, improving considerably the students' understanding of design as narrative by specifying that they use storyboards to investigate and convey information on

Several of the short films made for this project are available to view on You Tube:

Some of the storyboard drawings produced by our students are, in our opinion, remarkable. For example, those in figure 1 below were created for Amazing Grace,a movie portraying the journey of a pink post-it note through a building. 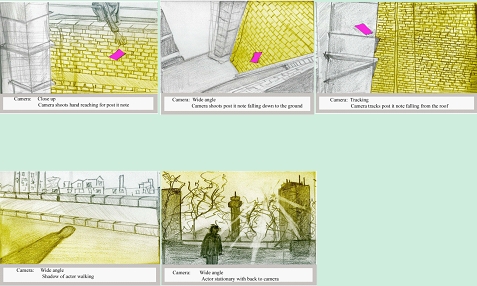 These images show, variously, the fluttering descent of the post-it note into a light well; a shadow cast across a roof terrace, plus middle-ground and background detail; and winter light silhouetting the London skyline. They indicate material and lighting qualities sensitively, and reveal the experience not just of being in but also of moving through spaces. In our opinion, they are excellent storyboard drawings, and provide a firm foundation for the students' more discipline-specific work-to-come.

Although we are gratified by the results summarised above, we believe that our students gain less benefit from this project than they could do because they are reluctant to draw by hand. This is of much interest because, although a great deal has been written about why spatial designers produce hand drawings, little appears to have been written about why spatial design undergraduates seem reluctant to do this. Welton (2011) and Schenk (2007) comment on these undergraduates' apparent inability to draw by hand; Tversky (2002), Mitchell (2011) and Eckert et al. (2004) discuss various reasons why that might be. It is the course team's intention to build on this apparently limited pedagogy in 2011-12, with the intention of strengthening the 'Brands and Movie-Making' project in the years-to-come.

This paper has discussed the drawings produced by spatial designers as tools for design development, focusing on sketch perspectives because these can be powerful tools for representing three-dimensions on a flat surface, but are limited in that they show buildings and spaces from a fixed viewpoint, describe only visual characteristics, and restrict the extent to which the designer can explore his/her work in terms of its narrative aspects and physical qualities. It has revealed that storyboards can aid the multi-sensory and dynamic investigation of interior space, but that students sometimes find it hard to use them effectively. It has appraised an innovative solution to this difficulty devised within the University of Bedfordshire's Spatial Design cluster[3], called the 'Brands and Movie-Making' project, which aims, inter alia, to tackle this problem. It has investigated the pedagogy underpinning the project, discussed how and why perspective drawing has been augmented by narrative-based storyboards, identified key challenges faced by students attempting to use storyboards, summarised the main components of the project brief, and reported on the course team's analysis of student work. It has demonstrated that, by requiring the students to produce storyboard drawings, the project has encouraged them to think in a more step-by-step and multi-sensorial way about their work, helping them to understand how this type of drawing can be employed to produce schemes that are richer, more subtle and more successful. It has discussed the students' seeming reluctance to draw by hand, observed that this has limited the project's effectiveness to date, and asserted that the course team intend to carry out research into this apparent reluctance in 2011-12.

[2] Inasmuch as a brand can be defined as "…a means of differentiating…products…from those of its competitors." (tutor2u.net/business/marketing/brands_introduction.asp - accessed 28/04/ 11)

@bedsCLE
RT @AdvanceHE: If you are a disabled student studying #HigherEd in England, the Disabled Students’ Commission would like to hear about your…

@bedsCLE
#LTHEchat 206: Are we really going to decolonise the curriculum? If so, how and when? Check in on Wednesday evening to join the discussion