I first came across Michael Wesch as the author of a video that I found utterly captivating. I've seen many videos in my time (and made quite a few) but this one was technically innovative and conveyed a challenging message. 'The Machine is Us/ing Us' is quite simple, but powerful, using only text – some handwritten – and music. First uploaded to YouTube on Jan 31, 2007, it highlights the extent to which whatever we create digitally is copiable and mutable and that the web makes possible all kinds of connectivity and opportunities we had never dreamed of before the advent of the Internet. To date, the original has been viewed 11.5m times! 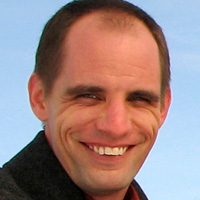 But that was just one video. He kept on making them with his students (see References) and more importantly, he thought about learning. A cultural anthropologist and media ecologist exploring the effects of new media on human interaction, teaching at Kansas State University, Professor Wesch talks inspiringly about his approach to active engaging learning. What most impresses me about Wesch is that he had the ability to radically change his approach to the classroom. Teaching cultural anthropology is a tall order: how humanity works, with all its diverse systems and complex relationships from the family, through the tribal, to the state and interlacing economic interactions can be a complex and dry subject in the wrong hands. Wesch tells of occupying centre stage for some years while his 400 students doodled, Facebooked, exchanged texts and sometimes listened but rarely got engaged. You can see what it was like in the video he made with his class in October 2007, 'A Vision of Students Today' (a mere 4.6m views to date).

The tipping point, he says, was thinking that in the room only one brain was engaged with the topic and wouldn't it be powerful if 401 brains were engaged…. This was the start of his World Simulation activity which, yes, you can view online. Instead of taking a didactic approach to trying to get his students to learn about how the world works, in Spring 2008 he embarked on an activity over a number of weeks where the students designed their own realistic cultures and then helped create rules for a live simulation to recreate world history since 1450 A.D. Importantly, he let the students choose how they would record the activities over the weeks (and centuries) and they chose to use Twitter and Jott. Interestingly, in 2006, Jott emerged as a leader in mobile voice-to-text applications. Twitter is still going strong, but Jott is no longer. The video shows their enthusiasm and engagement as they work through a practical application of the theories and concepts Wesch wants them to learn – and it's very clear that they are far more engaged, active reflective learners than they were in the sterile environment of the lecture theatre. In 2008 he deservedly received the award of U.S. Professor of the Year.

@bedsCLE
RT @A_L_T: If you didn't manage to join @ktstripe yesterday for the CPD Webinar: Creating and embedding personas into a digital curriculum…

@bedsCLE
RT @LSEImpactBlog: The Cycle of Decolonisation: A tool for applying anthropology to policy and practice and achieving social justice #Nar…

@bedsCLE
RT @EdTechYogi: Jane Simmonds is showing how you can facilitate learning with interactive videos / vodcasts. A great example of #H5P use. #…

@bedsCLE
RT @Jisc: One of the main channels through which the increase in open access to UK research is being achieved is through transitional open…