M. Cecilia C. Baranauskas is a Brazilian Professor and researcher in Human-Computer Interaction (HCI) at the University of Campinas (UNICAMP). She received the ACM Rigo Award (2010) for her lifetime contribution to the Design of Communication field, and became an Honorary Research Fellow at Staffordshire University (UK) in 2001 and a Visiting Fellow at the University of Reading (UK). She is one of the authors of the very first book of HCI in Portuguese, has led several projects in the context of e-Citizenship and e-Inclusion, and has advised more than forty Masters dissertations and PhD theses. Her research interests have focused on HCI issues, particularly investigating different formalisms (including Organizational Semiotics and Participatory Design) in the analysis, design and evaluation of societal systems.

The work that influenced me the most was her social perspective to the design of computing systems, which changed the way I understand technology design, adoption and use (Baranauskas, 2009; Baranauskas and Bonacin, 2008). Named 'Socially Aware Computing', this social perspective also contributed to the way I see and understand human behaviour, organizations and the world. 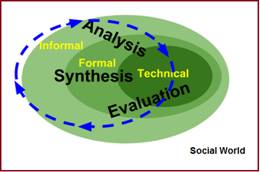 Baranauskas' approach to design considers three levels in which humans operate and understand the world: the informal, formal and technical. The informal represents the culture, values, habits, beliefs, behavioural patterns of people and other aspects that are usually difficult to describe, or even identify. The formal represents aspects that are well established and accepted, becoming social conventions, norms or laws. At this level, rules and procedures are created to replace meanings and intentions. The technical level represents aspects that are so formalized that they can be automated or approached in a technical way. Introduced by Hall (1959), these levels were structured by Organizational Semiotics theory (Liu, 2000) in a scheme represented by the Semiotic Onion — see Figure 1.

One of the three levels will always dominate in a given instant of time and, although we deal with them separately, all three are always present in any situation. For instance, in the context of learning, people may learn from observing other people and imitating them (informal); from other's explicit feedback, suggestions, and instructions (formal); or from books, guidelines, and other materials that explain and justify things in a coherently outlined form (technical). It is also possible to perceive the three levels in action when the adoption of technology to foster educational practices is being considered. There are several informal issues at play, mainly the emotional and affective ones, such as students' motivations and teachers' openness to change. There are also formal issues that must be understood and followed, such as the laws, the teaching program, and the students' minimum age. And there are technical issues, which range from choosing the right educational technology (which respects the formal issues and is in conformity with the informal ones) to the physical structure (space, internet access, network security).

Baranauskas brings to the design of computing systems the understanding that any technical system exists in the context of a formal system which, in turn, exists in the context of an informal one. She points out that design processes usually occur centred in technical aspects, giving little (or no) attention to the formal and informal aspects of organizations and society, i.e., it is focused on the core of the Semiotic Onion (Figure 1). Consequently, positive and negative effects on the formal and informal layers of the organization, as well as on society, are completely undefined and unanticipated.

Baranauskas argues that a technically centred perspective prevents a wider awareness of the problem being handled, the solution being designed, the stakeholders involved, and the complex social world in which they live, including their culture, values, differences, preferences, needs... Therefore, the designed solutions frequently do not make sense to users and trigger negative side effects on them and on the environment in which they are being used.

Instead, Baranauskas claims that any design process must be understood as a movement that begins from outside to inside the Semiotic Onion (see the dashed circle in Figure 1), crossing the informal and formal layers of signs towards the construction of the technical system, because this movement favours the identification, articulation and formalization of relevant aspects of the social world. Therefore, when the movement returns, the technical system will impact on the formal and informal layers and on the society in an informed way, reflecting an understanding of the social world, making sense to users and, potentially, promoting its acceptance and adoption.

Baranauskas' works have inspired me in several different ways. Her particular vision about the design reflects an ethical and social responsibility that we have to assume and disseminate not only as educators, practitioners, researchers and scientists, but mainly as human beings.

@bedsCLE
Congratulations to all NTF and CATE award winners! https://t.co/i9Ks02faZF