“I felt that going to Bedfordshire was the right thing for me – it was an opportunity to find myself and find my passion.” 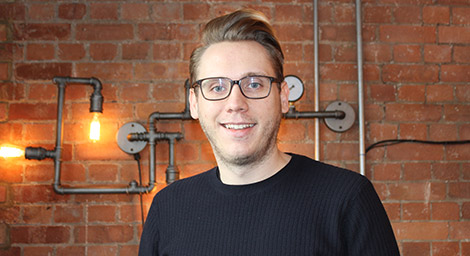 Alex Lawrence had always wanted to make films, but it wasn’t until he came to the University of Bedfordshire that he was able to turn his dream into a thriving business.

Alex, 31, is the Founding Partner and Chief Creative Officer for Clearhead, a content creation agency based in the Hat Factory in Luton, with offices in London and most recently New York.

“I felt that going to Bedfordshire was the right thing for me – it was an opportunity to find myself and find my passion.”

Alex came to the University in 2004 to study Media Production, along with his lifelong friend Gavin O’Brien. The pair had been friends for years, in fact, their first project together was creating a pop-up book in junior school.

“I had big ambitions for what I wanted to achieve but I didn’t necessarily have all the answers. My lecturers gave me the guidance and support I needed to find my passion and practice my craft. They also gave us access to state-of-the-art equipment which was really helpful,” said Alex.

Soon after graduating in 2007, Alex and Gavin started Clearhead, their own film production business, advised every step of the way by their tutors at the University. Ten years later, Clearhead has grown working directly with brands and universities across the world including the BBC, SKY, KIA and the NHS.

Alex is keen to give back to Luton and the creative industries, and is passionate about guiding the next generation of creative professionals, in Luton and further afield.

“Luton isn’t a place that people need to escape from. It’s one of the best positioned towns in the country. Young people don’t need to go to London to realise their dreams. I want to show them that they can do it right here in Luton,” said Alex.

More recently, Alex was asked to join the Royal Television Society (RTS) Committee, a charity that aims to nurture young talent in the creative industries, due to his extensive knowledge of digital media.

“My role with the RTS fits in perfectly with my ambition to be a mentor and nurture the talents of others. I want to be able to give people hope and something to aspire to, and the RTS means I can do that on a larger national scale.

“Bedfordshire didn’t just give me the practical skills I needed for my career. The advice and guidance I received at university meant that by the time I left, I had the life skills I needed to start up Clearhead and make it a success.”