"I still have to pinch myself when I look at all the names of presenters I've loved, listened too and learned from for a long time now alongside my name on the schedule, it's such a massive honour.” 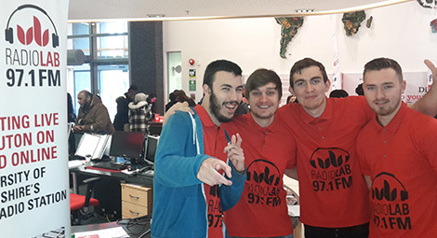 University of Bedfordshire student Joe Flemons is rising through the ranks of the radio world.

After securing a role at Capital Birmingham back in March, Joe has now been offered a coveted ‘network’ show on Capital FM, 22:00-01:00 slot on a Friday night broadcasting across the UK.

"I still have to pinch myself when I look at all the names of presenters I've loved, listened too and learned from for a long time now alongside my name on the schedule, it's such a massive honour.”

Joe is also the student manager for the University’s radio station, Radio LaB which broadcasts on 97.1FM.

Radio LaB Coordinator Terry Lee said: “Joe has been managing Radio LaB since September, and in that time I have got to see close-up just how talented and devoted to radio he is.

“It comes as no surprise to me that Capital are looking to show him off across the UK – he’s a fantastic personality and I’d suggest this was only the beginning.”

Alongside his radio work, Joe is a final year Broadcast Journalism student and is looking forward to both working and studying.

He commented: "To be a part of such an elite bunch of presenters within the Global family is still something I am ridiculously proud of, every time I'm on air, and I can't wait to get stuck into my new show alongside my final year studies as a Broadcast Journalism student."

You can catch Joe around the UK on Capital from 10pm to 1am every Friday night.

@uniofbeds
We're delighted to have been shortlisted in the 2022 @heistawards for the 'Best Student Recruitment Campaign' and t… https://t.co/bbFMofaTjg

@uniofbeds
RT @unibedscareers: Graduating soon? Update your details via https://t.co/0iYpTCAvXe, and ensure to share your graduate voice via the #Grad…

@uniofbeds
On Friday our Schools of Psychology and Computer Science & Technology are holding their ‘Psychology UG Research Con… https://t.co/8QTg43vFiD

@uniofbeds
RT @UniversitiesUK: How can we make green spaces more accessible to ethnic minority communities? Researchers at @uniofbeds are trying to…