“I really think university saved me. Bedfordshire taught me that is it OK to be me and that I should believe in myself. 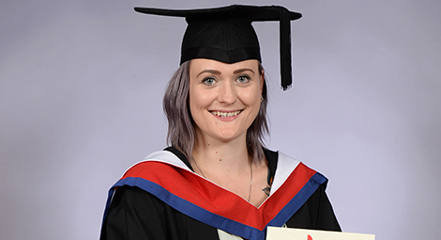 Cherrie Ball decided it was time to do something for herself following a particularly difficult day at work.

Thirty-two-year-old Cherrie was working as a cleaner when she decided enough was enough and she wanted to do something more positive for herself and her daughter.

“I had tried higher education before and it didn’t work out and it never felt like the right time. But it got to a point when it wasn’t a case of wanting to do something – I had to do something, to provide a better future for myself and my daughter – she was a massive motivator for me,” said Cherrie, who lives in Milton Keynes.

Cherrie had a difficult childhood due to a chaotic family life and drug addiction. She was expelled from school at the age of 13and for most of her life, she was told she would never achieve anything, so she lacked confidence and self-belief.

Despite her worries of not being able to succeed, Cherrie joined the University of Bedfordshire to study Criminology & Sociology.

“I had been out of education for over a decade and the first few weeks of university were absolutely terrifying,” said Cherrie. “When I got my first assignment back, I got an A, I couldn’t believe it. I was so sure it was a mistake, I took it back to my tutor to ask if it was right.”

But it was no mistake. With the help of her tutors and fellow students, who have become lifelong friends, Cherrie overcame her feeling of self-doubt and began to flourish. She was even awarded the Applied Social Studies Personal Development Prize at her graduation, which is awarded to a student who has overcome academic or personal challenges to succeed in their studies.

As well as making huge leaps forward academically, Cherrie also received support from the University with her mental health issues. It was a university counsellor that helped her get a diagnosis of complex PTSD (post-traumatic stress disorder) as a result of the trauma she suffered growing up.

“I really think university saved me,” said Cherrie, who graduated this summer with a first class degree, and is now considering postgraduate study. “Bedfordshire taught me that is it OK to be me and that I should believe in myself.