“Having the freedom to study the way it works for me has boosted my independence and allowed me to flourish not only as a student but also as an individual.” 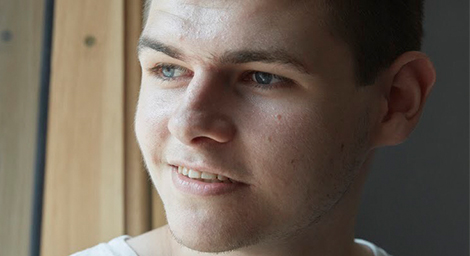 Throughout his education Luke had had extra support in lessons due to his autism and ADHD. However, as he got older he wanted to become more independent.

“As I went through high school, I realised that I didn’t necessarily need a learning support assistant to help me. It was a simple case of if I knew the topic we were covering and I was getting the answers right, then it became meaningless,” said Luke, 20.

“On the other end, you learn to fail in order to succeed. So when a teaching assistant was trying to show me how to get the right answer without letting me get it wrong first, it meant I didn’t really fully learn as much as I could have if I had straight out got it wrong.”

As he progressed to college, he found that support was thrust upon him when he had to sign a contract agreeing for a teaching support assistant to follow his every move when he was on site.

When Luke joined the University of Bedfordshire through Clearing in 2016, he felt liberated and able to study and learn independently, knowing support was always nearby if he needed it.

“University was beyond a dream come true. It has presented a fresh opportunity for me not only to fulfil my ambition to pursue a degree in Broadcast Journalism, but also to be far more independent in what I wanted to do and study.”

“Having the freedom to study the way it works for me has boosted my independence and allowed me to flourish not only as a student but also as an individual,” said Luke.

@uniofbeds
We're delighted to have been shortlisted in the 2022 @heistawards for the 'Best Student Recruitment Campaign' and t… https://t.co/bbFMofaTjg

@uniofbeds
RT @unibedscareers: Graduating soon? Update your details via https://t.co/0iYpTCAvXe, and ensure to share your graduate voice via the #Grad…

@uniofbeds
On Friday our Schools of Psychology and Computer Science & Technology are holding their ‘Psychology UG Research Con… https://t.co/8QTg43vFiD

@uniofbeds
RT @UniversitiesUK: How can we make green spaces more accessible to ethnic minority communities? Researchers at @uniofbeds are trying to…