Business student goes from Sainsbury’s to the boardroom

"Being able to study with students from different backgrounds really opened my eyes.” 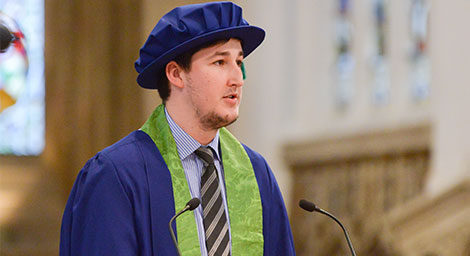 University was not part of Charlie's career plans. His ambition was to finish his A Levels and go on to work in the City; however this proved to be more difficult than he imagined.

After a year out working in a department store and a supermarket, Charlie decided that he needed to go to university if he was to further his career in the competitive business world. His interest in business and ambition to work in the City led him to apply for the Business Studies BA.

It turned out to be a life changing decision.

“I was challenged from day one, it took me out of my comfort zone,” he says.

“My course involved a lot of group work and because of the number of international students at Bedfordshire, I found myself working with students from China, India and Nigeria. Being able to study with students from different backgrounds really opened my eyes.”

Charlie made the most of all the extra-curricular opportunities that Bedfordshire offers. He captained the Luton campus football team, worked behind the bar in the Student Union and as a Fresher’s Angel assisting new students.

As he progressed through university, Charlie’s ambitions for his career changed; he became more socially aware and conscious of what it meant to be part of a community.

“The university, and specifically the activities that I was part of, made me think about working permanently in higher education or for a charity,” he says.

“When I left school, I was focussed on earning as much money as possible, but I have now realised it is far more important to find a job that I like, somewhere where I can really make a difference.”

Before graduating, Charlie was elected by the student body as Vice President Education for the Student Union. The role was a full-time, paid position, and Charlie worked to improve the level of education at the university, passing on valuable student feedback to staff.

The following year, Charlie was re-elected for a second term, this time as President of the Student Union. In this role he was offered a place on the remuneration board, becoming one of the first student representatives in the country to take on this position. He was also made a full member of the Vice Chancellor’s Executive group, the main decision-making body at the university.

Charlie had a great experience at the University of Bedfordshire, and university education has been a real game changer for his career.

@uniofbeds
RT @uniofbedsnews: A @uniofbeds alumnus saw the need for an easier way to find business accommodation during the #COVID19 pandemic. Since…

@uniofbeds
Join us for the next Bedfordshire Health & Social Care Academy @BedfordshireHSC Leadership Seminar on Wednesday the… https://t.co/UIlzGkNa3Y