How futsal kickstarted a graduate's career

“It was my first paid opportunity in football, which really challenged me and took me out of my comfort zone. But I was up for a new challenge and this role felt a little more prestigious than my previous volunteering work; I felt I had some meaning." 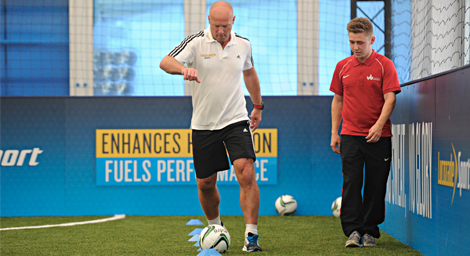 A few years ago, Lee Warren, a Sport and Exercise Science student at the University of Bedfordshire, was volunteering on weekends with just two or three people turning up to his football sessions.

Now, he’s a master’s level graduate with an enviable job, running the football development for British Universities and Colleges Sport (BUCS). How he got there, via stints at Luton Town and Stevenage football clubs, is a tale of perseverance.

“Initially, I found it very tough due to the hours I was completing with limited success,” he said.

“Volunteering on a Saturday with so few people turning up was very disheartening but I believe these experiences have made me come out a better individual.”

Lee’s passion for football and providing a positive experience for fellow students kept him going and, slowly but surely, likeminded people started to trickle in. Eventually, Lee’s activities became oversubscribed and the way was paved for a serious university futsal (small-sided, indoor football) team.

Last season, the side claimed the league and cup double, winning every game on their way to the BUCS Midlands 2B and Midlands Conference Cup titles.

Lee, who still manages the squad and has since initiated a Friday night futsal league at the University, is proud of his coaching achievements, which prepare him well for the UEFA coaching licence he plans to obtain in the future.

“It was a real honour to coach the newly formed futsal team,” he admitted.

“With such an enthusiastic group of lads, we quickly developed a great team-togetherness and were all fully committed.

“It was fantastic to see light at the end of the tunnel, engaging over 1,000 football participants over three years, providing very much the biggest recreational programme the University offered.”

At that stage, Lee had already gained paid employment at the University, as its Football Activator. The perseverance had paid off.

“It was my first paid opportunity in football, which really challenged me and took me out of my comfort zone,” said Lee.

“But I was up for a new challenge and this role felt a little more prestigious than my previous volunteering work; I felt I had some meaning.

“This is where I was able to put all those experiences I had gained through volunteering into practice. Those horrible hours I put in felt worthwhile!”

His determination, hard work and, ultimately, success, led to recognition by BUCS, who named him the Student Volunteer of the Year in 2014.

Subsequently, the organisation has employed him as Football Development Co-ordinator, while futsal has become engrained in the BUCS programme.