From the classroom to the KISS radio studio

“I’ve wanted to be a presenter ever since my second year at Beds where we worked in the Uni’s TV Studios and now it’s finally happened. To be honest it hasn’t sunk in yet! I’ve had hundreds of people congratulate me, it’s just been mad really.” 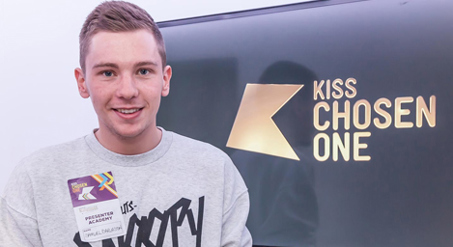 Sam Darlaston, who graduated with a First Class Honours in Media Performance from Bedfordshire last year, is the KISS Chosen One 2015, after he won the competition which asks listeners to audition to become ‘the fresh face of KISS’.

Three weeks ago Sam sent in a video of his presenting skills and after being whittled down to the final 20, and then final five following another homemade video, he was announced live on air yesterday as KISS’ latest recruit.

“I’ve wanted to be a presenter ever since my second year at Beds where we worked in the Uni’s TV Studios and now it’s finally happened. To be honest it hasn’t sunk in yet! I’ve had hundreds of people congratulate me, it’s just been mad really.”

Whilst at Bedfordshire Sam, who originates from Nuneaton but is still currently living in Luton, took every opportunity which came his way.

He worked on the University’s community radio station, Radio LaB 97.1fm, and attained work experience in a paid role at Applause Store where he still works today as a TV Audience Manager –working on shows such as the X Factor helping to organise the audience.

“My three years at Bedfordshire provided me with the best education; I’ve loved it. I arrived wanting to be an actor, and I still hope to pursue this one day, but now hopefully everything I’ve done on the course, like the radio unit, will set me up now for my role at KISS. I’m so happy I can’t believe it, but trying to take it in my stride.”

After Sam’s first Chosen One application, he was told he had made it to the final 20 ‘Presenter Academy’, where he had to visit the studio and interview former winners.

He then made it into the Final Five where he was tasked to make a three minute video.

In this clip he admitted he didn’t have a camera, a microphone, or any lighting, however Sam stated he did have “confidence, personality and determination”, and then proceeding to produce a hilarious piece which includes an interview with his nan and a shot of him feeding his hamster.

The video, made on a mobile phone, attracted some 2,000 hits on YouTube, but Sam still said he didn’t believe he stood a chance of winning.

However KISS thought otherwise and spokesman said: “When we called Sam to tell him he’d won and we asked him why he thought he’d been selected as the chosen one he said he was ‘just being himself’ and we think that’s why Sam shone through right from the start; he has a natural engaging personality.

“It also helps he’s pretty funny too! He’s already made a good start with his own YouTube content and we believe our audience will embrace him as one of their own.”

Maria Wiener, a Senior Lecturer Media Performance at Bedfordshire was one of Sam’s lecturers, and congratulated him saying she was “extremely proud” and “excited”.

“Sam has a very critical and creative mind, is an intelligent, talented, highly driven performer with a charismatic personality and a great sense of humour.

“He is not afraid to take risks, to step outside of his comfort zone and to use his imagination to produce outstanding results either as a team player, or as an individual.

“Sam, just like all of our graduates, has been encouraged, nurtured and supported to pursue his dream career, so to see him succeed in this competition is the most wonderful news.

“He now joins a long trail of successful graduates and forms an inspiration for our students.”