“It’s definitely opened up their [Randstad’s] minds to the great talent we have at the University. They are now trying to hire more people from the University so it’s opened up more opportunities for students.” 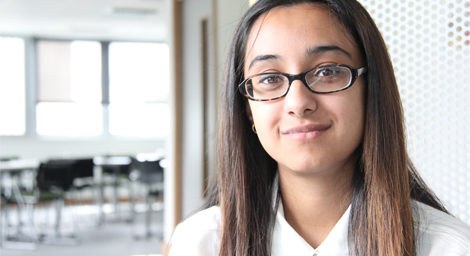 Jigna Tailor spent a year on placement at the company’s UK headquarters during her Advertising and Marketing Communications course at the University, earning high praise and the tag of ‘most intelligent person’ they have come across.

Through her monitoring of job board usage, Jigna saved the company over £100,000, and a further £11,000 with the implementation of an intranet.

“I’m pretty pleased with how it’s all gone and all the achievements and experience I’ve got out of it,” said Jigna.

“It was a really good experience that helped me learn about work etiquette and what an office environment is like. I came back [for her third year studies] wiser.

“The team at Randstad were really supportive and tolerant with all my questions! I was very grateful for that.”

As well as helping Jigna on her way to graduating, the success of the sandwich year earned her recognition in a national award.

Jigna was Highly Commended in the Commercial Impact Award at the Student Employee of the Year Awards 2015. To top that off, she fended off 600 other students to win the regional award for the same category.

“She has since claimed her dream job in the centre of London, starting her role at recruitment firm Goodman Masson just a fortnight after graduating.”

But it’s not just her own prospects that have been boosted by her time at Bedfordshire; she’s also opened doors for her fellow students.

“I was put in charge of creating a link between Randstad and the University,” she explained. “One of the ways in which we did that was to create a marketing academy.

“It’s definitely opened up their [Randstad’s] minds to the great talent we have at the University. They are now trying to hire more people from the University so it’s opened up more opportunities for students.”